A week traveling Thailand – too many hotel rooms and cold showers and not enough decent internet access.

We flew into Bangkok on Saturday 23rd – and after an overnight at the airport we flew on NokAir on Sunday afternoon to a very cold and wet Chiang Mai.

The Sunday night street market in the old town has turned into an exploitational disaster. So many stalls – even in the middle of the road, ensures that even on a cold wet Sunday it feels way to crowded with too many stalls selling nothing that you would have any interest in buying.

So we gave up and went to Goodview by the river – it was cool but still busy. Music and food. And back to our hotel for a cold shower.

All day Monday was a photoshoot for Tai. 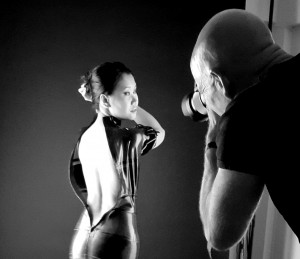 I would like to tell you more about the photoshoot – enough to say that I like James and I like how he goes about his work.

Monday night we met up with the lovely couple, Apple and Tim, and Apple’s slightly shocked mother! Back in Goodview. Even colder than the previous night.

Tuesday was an even colder morning; and wet. We were at Woraros market fixing Tai’s bridesmaid dress. Friendly folk there.

How cold was Chiang Mai: 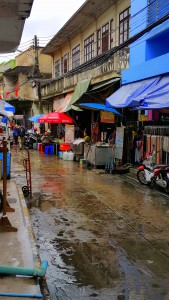 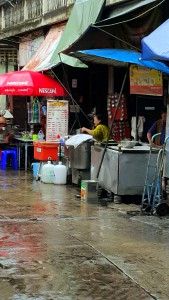 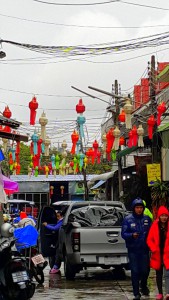 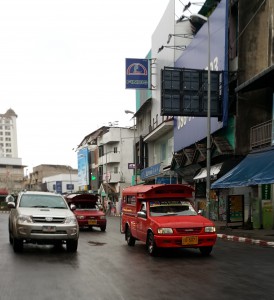 AirAsia back to DonMuang. Uneventful. Overnight at the Novotel Fenix on Silom Road. A dinner meeting at Siam with Bantarawan and Marko to run through their wedding plan for a few days later. Yes they did trust me to officiate. Brave. Their big day; their wedding day. Not something I could f*** up. So I had worked hard on the script for their wedding – keep religion out of it – but keep it meaningful. The plan – it should be emotional enough that their would be some tears.

Wednesday morning – the first of my BNH dental visits for root canal work. Take Tylenol and don’t think about me said Ajarn Charriyaporn (my dentist) as we finished up.

So that meant that for at least half of our drive to Dolphin Bay I really did not want to talk.

Dolphin Bay was pleasant enough – quiet – I had a long private walk early on Thursday morning – not a lot of sleep – toothache and some disturbing news about my mother – who had been found – unconscious – at home by Devon and Cornwall police. 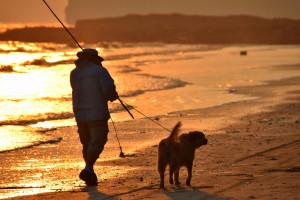 Thursday was another few hours driving the very slow Highway 4 to the south. And down to the Ban Saithong Beach Resort.

Just a few wedding guests there on the Thursday night with most turning up on Friday. this was good as for one night we had a superior room – before a significant downgrade the next day. Tim with Apple and Nina with Brendan and Indy did even better scoring the two Jacuzzi villas. The resort is very pleasant; and quite isolated. The beach not ideal for a beach wedding but just fine for a beachside wedding overlooking the ocean. 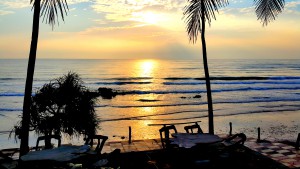 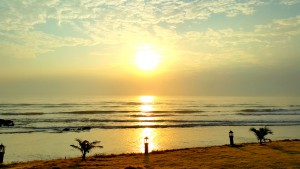 Friday morning involved pictures around the pool and the hotel grounds before lunch at Bangberd beach and a drive around the beaches and fishing villages. 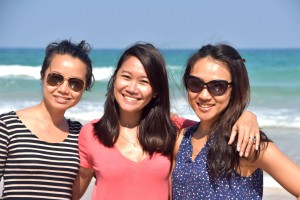 That and the Bangberd beach jumping contest. 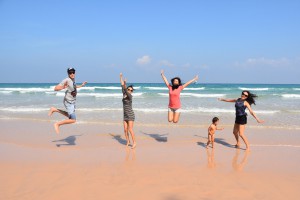 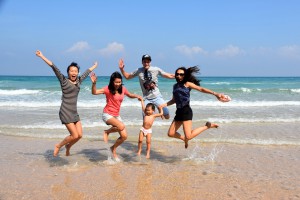 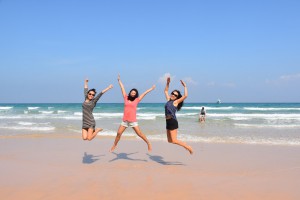 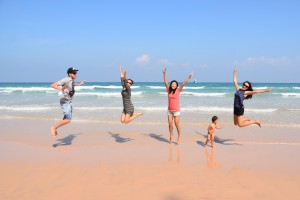 Which brings us to wedding day and a Thai-German union with me as the Celebrant – and yes there were tears….so I reckon that was a success. The bride looked glorious; the bridesmaids mostly splendid and the groomsmen tall and well-fed!

Just one note here – trying to be the centre of attention is wholly inappropriate when it is your friend who is getting married – and we all know who I mean here!

There are lots of wedding pictures: This is a good place to start: 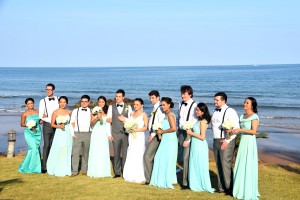 That is about up to date – the party ended at 3am – other than for some noisy guests who sat on the wall outside the rooms and chatted until later – I was very glad I was not in the 5am departures. A leisurely drive along the coast to Prachuap Khiri Khan and then the highway to Hua Hin – for (at last) a hot shower.