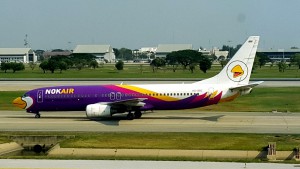 Sometimes it does seem that Nok Air’s CEO, Patee Sarasin, is no more than a self-publicist…..he seems disconnected from both how to run an airline and how to interact with his passengers.

He is active on twitter; he hires only young women as cabin crew; he gets publicity for the airline through a crew recruitment reality show.

But his recruitment policy is depressingly sexist with a focus that appears more about image than safety.

The airline got some poor publicity earlier in the week when one of its ATR’s approaching Mae Sot in poor visibility appears to have missed its approach to the runway and flown far too close to the local hospital.

But today he truly appears to have lost the support of both pilots and customers….

There were chaotic scenes at Don Muang airport in Bangkok when the airline was forced to cancel the a number of flights because more than 10 pilots staged a strike after the airline apparently announced increased audit standards for the flight operations which meant that a number of the airline’s pilots did not meet the new criteria.

The new standards were to bring the flight operations department into line with those of the European Aviation Safety Agency.

But you cannot simply announce a change in the rules for your pilots without a discussion with them in advance.

The airline announced the cancellation of the eight flights at 3pm. All were scheduled to leave Don Mueang airport late in the afternoon to Chiang Mai, Khon Khaen, Hat Yai, Nakhon Si Thammarat, Surat Thani, Phitsanuloke, Phuket and Ubon Ratchathani.

Mr. Patee said to the Bangkok Post that “I am confident that there will be no problem with flight cancellations tomorrow as Monday is a normal working day when the full administration resources and back-up plans are in place.”

Hang on – Sunday is the busiest day of travel for Thailand’s LCCs as passengers return to their homes ready for a new work week. This is one day of the week when the airline needs its back-up plans to be ready to go.

Don Mueang airport director Petch Chancharoen said the airline had to arrange accommodation for the stranded travellers if it could not find alternative flights for them and described the situation at the airport as chaotic.

Meawhile the CEO has been silent on twitter and has not met with the passengers impacted by this action.