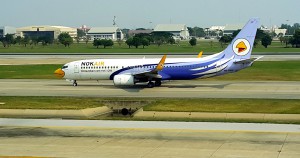 Remember the story from the weekend about Nok Air pilots striking because the airline had told them that they did not meet the ICAO safety standards.

At least that was the version stated by the airline’s CEO, Patee Sarasin.

On Monday Nok Air stated that one employee had been fired and two others suspended.

Sanit Kongpetch, a pilot and the airline’s manager of flight standards, was fired without severance or compensation for an unspecified “offense against the company.”

Two other unidentified employees were suspended for eight days while seven others face an inquiry, according to the document signed by Nok Air CEO Patee Sarasin.

The airline contends the strike began after a number of pilots failed to pass a new assessment made to bring the airline in line with international safety standards.

At long last the media decided to ask the pilots what is happening….and their story is very different. The pilots say the dispute is about internal company issues.

Mr. Sanit has since complained that he was unfairly dismissed and he said the cancellation of nine flights on Sunday was due to an acute shortage of pilots.

Mr Sanit Kongpetch claimed that he was not on duty on Sunday and had just recovered from illness when he was asked by the company to report to work.

However, he said that he told the supervisor in charge of the pilots that he was not mentally fit to fly and asked to return to rest insisting that a pilot who was stressed or sick should not be allowed to fly because it might affect the safety of the passengers.

The pilot also dismissed the management’s claim that the pilots who went on strike on Sunday because they were dissatisfied because they failed the EASA (European Aviation Safety Agency) standard test.

“EASA test is meant to test the company’s aviation safety standard and not to test the pilots,” said Mr Sanit.

Nok Air’s CEO had a different theory and said that Sanit signed up to fly but 15 minutes before he was due to fly he disappeared and could not be reached while the co-pilot was waiting in the cockpit.

He said there was no way for the company to find a substitute for Mr Sanit within 15 minutes and the flight had to be cancelled.

What is strange is why the airline does not have pilots in reserve to fly in the event that pilots are sick or for other reasons unable to fly?

Sanit stated that Nok Air had recently lost many pilots to other airlines.

The Nok Air CEO tweeted Monday afternoon that he would not speak to the media until the company finalizes a plan to address the problem, possibly by Thursday.

Nothing like leading from the front Khun Patee and reassuring your passengers and staff.

But then Khun Patee know his priorities; he failed to attend a government meeting with airline executives on Monday because he was filming a commercial in Hua Hin.

The CEO did attend the Transport Ministry on Tuesday, and said that the strike was caused by management’s decision to have the pilots choose to be either executives or pilots, a safety measure aimed at separating duties. At least his story is consistent.

In that typical Thai news way we will probably never get an honest version of the issues and events at Nok Air in the last week. But it sounds like an organisation that needs real leadership that builds trust with the media, passengers and regulators.