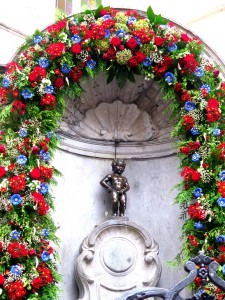 How did we get to this? Angela Merkel, like almost every leader in Europe, is determined to keep Britain in the EU. But she is annoyed that it has come to this. According to sources close to her, she blames Cameron for creating a mess in the first place, through failure to control his party and the dynamic that led to a referendum.

She is right. But we are where we are. None of this should ever have been necessary. Change the EU from within. Not have some unnecessary wasteful debate about whether we should leave something that as a nation we should be committed to.

The referendum will divide Britain in a way that should not have been necessary. It will raise the heat on immigration and immigrants. And of course it divides Europe – whose distrust of the British must be peaking.

Oddly it was back in 1975 that the UK held its referendum on EEC membership. It was the first time that I could vote – and at the time I was on the “no” side – largely because I did not believe we were being told all we needed to know about the costs and obligations of membership. But we voted yes – joined the EEC and this really should have been a once-off vote – in or out.

If you want to change how the EEC/EU works then change it from within.

Is the EU a good idea? Yes, fundamentally. Is it efficient? Not one bit. But instinctively we are stronger as Europeans than as members of what Emma Thompson wonderfully called “a tiny little cloud-bolted, rainy corner of sort-of Europe, a cake-filled, misery-laden, grey old island”.

Of course Ms Thompson was abused by the right wing media and others. The Sun calling her a “champagne socialist.”

David Cameron has spent months negotiating changes in Britain’s membership. The rest of Europe must be exasperated. Why should Britain be special? And who will now demand some sort of special status?

So who will be lined up on which side:

The pro-exit camp has two main groups, Grassroots Out and Vote Leave – one closer to UKIP the other to the more sceptic Tories. Both seem only to appeal to those who fear a more multi-cultural integrated society and who fear European (by which they really mean East European immigrants and a demand for Britain to take in Syrian refugees). These people want to build a wall around Britain.

Gove’s statement today at least added some intellectual weight to the exit campaign.

“I cannot duck the choice which the prime minister has given every one of us. In a few months’ time we will all have the opportunity to decide whether Britain should stay in the European Union or leave. I believe our country would be freer, fairer and better off outside the EU. And if, at this moment of decision, I didn’t say what I believe I would not be true to my convictions or my country.”

“Instead of grumbling and complaining about the things we can’t change and growing resentful and bitter, we can shape an optimistic, forward-looking and genuinely internationalist alternative to the path the EU is going down. We can show leadership. Like the Americans who declared their independence and never looked back, we can become an exemplar of what an inclusive, open and innovative democracy can achieve.”

The justice secretary showed his unease for the EU by blaming it for the rise of extremism. “Far from providing security in an uncertain world, the EU’s policies have become a source of instability and insecurity. Razor wire once more criss-crosses the continent, historic tensions between nations such as Greece and Germany have resurfaced in ugly ways and the EU is proving incapable of dealing with the current crises in Libya and Syria … All of these factors, combined with popular anger at the lack of political accountability, has encouraged extremism, to the extent that far-right parties are stronger across the continent than at any time since the 1930s.”

That seems extreme; it is hard to picture the EU as the source of extremism. That finger might indeed be pointed at the likes of UKIP, who Gove is now allied with.

On the stay in side is this unlikely mix of Tories, Labour and the few remaining LibDems. The prime minister and the leader of the Labour Party will be making wholly contradictory cases for staying in the EU.

David Cameron will argue that he has bravely secured a new settlement with the EU to protect the UK from too much Brussels interference. Not really. Not much has changed.

Corbyn wants an EU that shapes social protection of workers. And that is the last thing the prime minister could ever campaign for, if he wants to remain leader of the Tories.

Basically little has changed. Britain has always been something of an EU exception. Not needing to join the euro, retaining passport controls and not being in the Schengen free travel zone, enjoying Britain’s big budget rebate, not having to join common EU policies on justice and home affairs.

The trouble with Cameron is that he has spent his entire decade as party leader undermining support for the EU.

The EU faces real substantive issues. It has looked weak, split and immobilised over the migration crisis. It looked clueless when faced by the euro’s weakness; austerity was a predictable but wrong answer.

The EU has fumbling over the Ukraine and Crimea; it has been ineffective in dealing with Putin.

Britain has made no contribution to these real issues.

Instead Britain has forced the EU to debate the precise size of payment of child benefit to very few children of EU migrant workers. Mean-spirited. Meanwhile Osborne’s has tried to restrict EU regulation and taxation of our tax haven City of London – where barely an ethical bone exists.

As for resigning from an “ever closer union”, that looks peculiarly empty when the EU is pulling itself further apart.

Cameron’s pettiness has demeaned and embarrassed Britain. Joining a large group means group decisions, but together garnering more power against global forces. Work from withing not from without.

It is easy to forget why the EU exists. Securing democratic freedom was its founding postwar purpose, which explains the hasty eastward enlargement when the Berlin Wall fell. Former communist countries, and Greece, Spain and Portugal, were all embraced, regardless of economic cost.

The EU was a beacon of decency. And that is why we should be a part.

Instead the biggest fear is that the in/out debate becomes a referendum on immigration. Barrier Britain. But remember a leave vote doesn’t secure us against global mass movements.

Who are the British? Where do they belong in the world? What’s the future for their long-term interests? And which allies are closest to their own values? Answer those questions and you will know why we should never have even got this far.

Jeremy Corbyn understands why Britain should remain in the EU – “It’s because being part of Europe has brought Britain investment, jobs and protection for workers, consumers and the environment. We are convinced that the EU is a vital framework for European trade and international cooperation in the 21st century, and that a vote to remain in Europe is in the best interests of our people.”

Corbyn will lead the Labour campain to create real change in Europe based on opposition to austerity and a Europe of sustainable growth, jobs and social justice.

Four months of debate lie ahead. I suspect the real substantive issues will get little debate. But staying in the EU, as responsible, articulate participants, is the key to changing the EU.