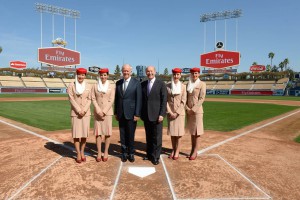 Emirates Airline announced today a new sponsorship deal with the Los Angeles Dodgers, one of the world’s biggest sports franchises.

Emirates will be the Official Airline Sponsor of the Dodgers in a deal to mark its entry into the world of baseball.

Bit odd really – as the Dodgers National League games are all domestic so the Dodgers will not be flying of their official airline.

As part of the agreement, Emirates will have home plate and foul pole signage and will open a new Emirates Lounge, a 70 person hospitality space.

To extend the partnership, the Dodgers will be sponsoring the Dubai Little League All Star Travel Teams, which will now go by the name the Dubai Dodgers. That is a fun part of the deal.

In the US, Emirates is also the main sponsor of the New York Cosmos, the US Rugby Team and the San Francisco Symphony.

“Baseball is a sport that unifies many communities across the US. The spirit of competition and fair play, the continuous drive to excel, and ability to foster a shared passion and connection with its fans – these are all values we share at Emirates,” said Sir Tim Clark, president of Emirates Airline.

“This is a historic partnership as it is Emirates’ first major league team sponsorship in the US. We are proud to be the Official Airline partner of the Los Angeles Dodgers, who are an innovative and cutting edge organization not just in the world of baseball, but also in the broader realm of popular sports and culture. We look forward to a long-term partnership with the Los Angeles Dodgers, and to working with them to support and connect fans and the community to the team.”

Michael Young, Dodgers’ senior vice-president, Corporate Sponsorships, added: “We look forward to working with Emirates and their great staff in activating our multi-year partnership with our fans.”

Emirates first launched services between its hub in Dubai and Los Angeles in 2008. As demand grew, in 2013 Emirates began flying the A380 aircraft to serve LA travelers. Starting July 1, Emirates will bring a second daily A380 service to Los Angeles, offering a total of 980 seats per day flying from Los Angeles International Airport to Dubai.

The Los Angeles Dodgers franchise has won six World Series championships and 21 National League pennants since its beginnings in Brooklyn in 1890.