Home→asia→Thaksin takes off the gloves 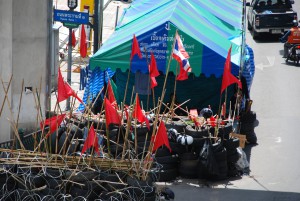 It is a statement of the obvious – but it came from long-silent Thaksin so it is significant, and it will upset the junta.

The junta, which took power following a May 2014 coup, has struggled to revive Southeast Asia’s second-largest economy amid falling exports and high household debt and critics say economic mismanagement is the biggest threat to its hold on power.

Speaking to Reuters in Singapore, Thaksin, 66, said the junta lacked the vision and talent to fix an economy in disarray.

Thaksin has also had interviews in the last week with the FT and Al Jazeera news. He is on a mission.

“It is a government with no freedom and no pool of talent to drive the economy,” Thaksin told Reuters. “The longer they stay, the longer economic hardship is going to be there.”

Thaksin on Tuesday denied long-standing reports he had struck a backroom deal with the military to leave his personal and family interests untouched in exchange for a retreat from politics.

“We are not talking. I have never telephoned anyone. I don’t know why I would get in touch with them and I have no need to,” Thaksin said.

Thaksin has lived in self-imposed exile for nearly eight years, mainly in Dubai.

In 2010, he urged his “red shirt” followers to mobilize protests calling for elections that ended in a bloody confrontation with the military in which more than 90 people died. His legacy of village welfare and cheap rural loans made him a hero in red shirt country in the rural north and northeast where he still commands huge respect.

But critics, including the urban elite, accuse Thaksin, a former police colonel turned telecoms tycoon, of widespread corruption. He was sentenced to two years in prison in 2008 for graft in a land purchase case, which he says was politically-motivated.

Thailand has gone through six prime ministers since Thaksin was removed in a 2006 coup and finds itself once again at a crucial political juncture.

The junta has promised elections next year. But some critics are skeptical, saying the military’s objective is to block Thaksin’s allies from returning to power and to consolidate the military’s own powers by writing them into a new constitution.

Thaksin’s decision to speak to media this week has riled the junta.

“He remains a person without credibility who thinks he is above the law,” government spokesman Major General Sansern Kaewkamnerd told reporters.

The government has rejected Thaksin’s offer to hold formal talks on the country’s political future.

“They said they can’t talk to me because of the cases against me but a coup is a bigger crime,” Thaksin said.

Thaksin, who said he spends his time meeting up with old friends including former heads of state, said he has adjusted to his nomadic life and makes, on average, 120 landings a year in his private jet.

He believes he will return to Thailand one day but won’t go back to face charges or live under house arrest because of previous assassination attempts.

“I am confident I can return,” he said. “I am not the bad person I am accused of being.”