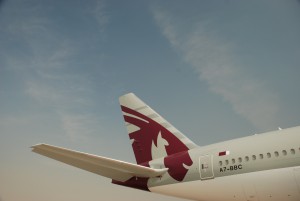 Qatar Airways has apparently sacked the pilots responsible for substantially damaging a Boeing 777 when it struck a set of runway lights during takeoff from Miami in September.

Back on 15 September last year a Qatar Airlines Boeing 777-300, registration A7-BAC performed flight QR-778 from Miami,FL (USA) to Doha (Qatar). The airplane departed Miami’s runway 09 but struck the approach lights for runway 27 during departure. Both tower, departure controllers as well as crew maintained routine communication. The aircraft continued to destination for a landing without further incident about 13.5 hours later.

Those were the bare details.

Although the Qatar CEO has consistently argues that safety was not compromised two basic facts suggest otherwise. 1: The airplane entered the runway at taxiway T1 and therefore had just 2,600metres rather than the full 3,900metres available.  2: Despite damage to the airplane that was described as substantial the airliner continued its 13 hour over water flight to Doha.

A preliminary investigation determined that the aircraft entered the runway at an incorrect intersection, rather than using its full length. This meant the runway was too short for the heavily loaded plane to safely take off.

As a result, the aircraft only became airborne at the very end of the runway.

The collision with the approach lights – located approximately 60m from the end of the runway – caused a 46-centimeter tear in the fuselage behind the rear cargo door, as well as 90 dents and scratches and some damage to a metal landing gear guard.

At the time of the incident, there were four members of the flight crew in the cockpit: the captain, first officer and two relief pilots.

The Sydney Morning Herald reported that all of the pilots on the flight deck that day had been fired.

Asked about their termination at a press conference this week, Qatar Airways CEO Akbar Al Baker said the incident was the “first and last” time something like this would happen.

Never make promises that you can never be sure of.