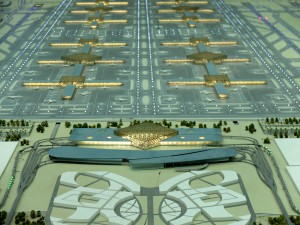 Dubai Airports have appointed a contractor, ALEC, to expand the existing, rather basic, terminal building at the new Al Maktoum International AIrport.

Al Jaber LEGT Engineering and Contracting (ALEC) was appointed by Dubai Aviation Engineering Projects (DAEP) to increase the built-up area of the passenger terminal from the existing 66,107 sq. m. to 145,926 sq. m. The work is set to be completed by June 2017.

It is the first phase of an expansion project that will see the airport handle up to 26.5 million passengers per year by 2025.

Now how does this number make sense? On its own it does not.

The existing DXB terminals have been expanded with Concourse D to a capacity of 90 million. Add 26.5 million at DWC for 116.5 million passengers by 2025.

But look at this chart from Anna.Aero which shows the passenger numbers over the last nine years at Dubai, Doha and Abu Dhabi. 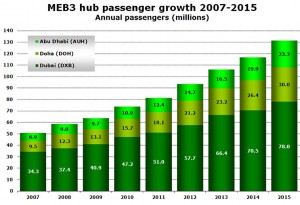 Passenger growth at DXB has exceeded 10% a year over the last nine years.

There is some slow down in 2016 with a possible full year number of 83.5 million. Then project forward at a conservative 6% per year for the following numbers. The trend is your friend and these must be the minimum numbers expected by DXB.

Any growth in excess of 6% per annum accelerates the need for rapid expansion at DWC.

With no further room for growth at DXB then DWC will need a capacity of at least 50million by 2025. If the existing LCC terminal can only accommodate 26.5 million then the proposed West terminal at DZC will need to be operational by the end of 2022.

The work on the existing terminal includes a new immigration hall with 55 counters. The departure building will see the expansion of the public hall, commercial areas and offices as well as the check-in hall which will house 64 check-in counters. An additional 10 counters will be specifically dedicated to business-class travelers.

The existing terminal has no airbridges and it appears that the expansion assumes that passengers will be bussed to their airplane. Effectively this is a LCC terminal. It is reasonable to assume that flydubai will be expected to move there after the expansion is completed in 2017. This will free capacity for some airlines at DXB’s Terminal 2 although moving there will not be popular for any airline.