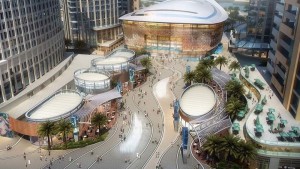 Back in August 2015 the local Dubai media was excitedly reporting that the new Dubai Opera House would be completed in March 2016.

So as we approach the end  of March 2016 how was the opening?

The developer’s website puts the completion date September 2016, revealing the concrete works are almost complete and the roof has been fully installed, while the electromechanical, façade, finishing and fit-out works are in progress at all levels.”

Here is Emirates 24/7 again: the same reporter but of course he does not mention that the date has slipped six months.

The Opera House will be a very welcome addition to the city. It is a shame that it will be surrounded by high rise condominium and hotel construction for some years to come. More green space around the opera house would have been welcome. Think how much open space exists around the Sydney Opera House for instance.

But for Emaar there is too much money to be made around this site.