Home→asia→Myanmar – where the army still determines the way ahead. 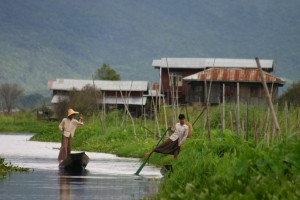 The Economist’s article is interesting – as this near fake democracy is a role model for other governments in South East Asia – including Thailand.

Yes, Myanmar does have a new President. The NLD does hold a commanding majority in Parliament.

But the army still has its hands on the steering wheel and will determine the path that the country takes.

On March 30th in Napyidaw, Myanmar’s eerie purpose-built capital, Htin Kyaw was sworn in as the country’s first civilian president in more than 50 years. Parliament elected him president just over two weeks ago; in Myanmar’s hybrid electoral system, the people elect parliament, and then parliamentarians vote for president. His party, Aung San Suu Kyi’s National League for Democracy (NLD), won commanding majorities in both houses of parliament last November, allowing them to elect their chosen candidate easily. Thein Sein, the outgoing president, handed over power peacefully. Min Aung Hlaing, head of the army, which ruled Myanmar either directly or through its fig-leaf party since 1962, said he supports the country’s democratic transition. This seems a triumph for Burmese democracy. The reality is more complex.

Mr Htin Kyaw was neither the NLD’s nor Myanmar’s first choice for president. They would have preferred Miss Suu Kyi, but the constitution bars anyone with a foreign spouse or children from the top job (her sons, like her late husband, are British; most believe the bar was specifically written to keep her out of office). Before last November’s elections Miss Suu Kyi said she would put herself “above the president”. She will run the country from the foreign ministry, while Mr Htin Kyaw, her longtime confidante and loyal placeholder, holds what looks like a nominal presidency. Installing a puppet president and subverting the constitution marks an inauspicious beginning for a party nominally devoted to democracy, transparency and rule of law.

But the larger threat to democracy comes from the expansive power Myanmar’s constitution reserves for the army. At a parade on March 27th Mr Min Aung Hlaing reminded Myanmar’s citizens that the army “ensure[s] the stability of the country” and “has to be present in a leading role in national politics.” The constitution was written to preserve that role. The army controls three powerful ministries: defence, border affairs and home affairs. The last gives it control of the state’s administrative backbone, right down to the village level. Through those ministries the army dominates the National Defence and Security Council, which can disband parliament, impose martial law and run the country. Changing the constitution requires a 75%+1 majority in parliament; since the army has 25% of seats reserved by law, it holds a perpetual veto.

So the civilian government and army will essentially control different parts of the government. The NLD’s top priorities are economic development and reaching a lasting peace with ethnic minorities along the country’s borders, some of whom have been fighting the central government for decades. These tasks are linked: unless Myanmar’s central government extends the state’s reach into the resource-rich borderlands, its economy will never reach full potential. But that may require the new government to make concessions that the army does not like, and the army’s control over the border-affairs and defence ministries—as well as its operational independence—give it an effective veto. How this conflict plays out will determine whether Myanmar keeps going forward on the road to democracy, or whether the army grabs the steering wheel for a quick U-turn