Home→asia→Ocha and Proo and a banned book cover 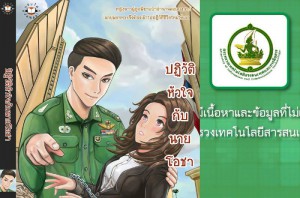 This is one of those lovely Thai stories where the Junta gets all tied up in fear of a piece of light creative entertainment that none of us would ever have heard of until the site was blocked.

A cover design entitled “A Coup of the Heart with Mr. Ocha” featured on Ookbeecomics website was blocked on Monday.

“A Coup of the Heart with Mr. Ocha” was submitted to compete for the best book cover in the Jamsai Fanart competition.

The drawing depicts a military man with his arm around a woman whose wrists are shackled together while the background appears to depict Democracy Monument in Bangkok.

The cover displayed on comic community Ookbeecomics remains available online. However, clicking on the cover today leads to a message from the Ministry of Information and Communications Technology saying that the link is blocked.

“A girl was controlled by her megalomaniac brother, so the general has to step in and revolutionize her life,” reads the tease on the book jacket.

With a plot featuring an army hero named Ocha and a heroine called Proo, some could be reminded of the junta chief’s last name and former Prime Minister Yingluck’s nickname, “Poo” (crab).

“Ocha, a hot-tempered general is ordered to keep his eyes on a girl with a pretty, pimple-free face called Proo, whose mind is controlled by her brother. Their family are billionaires. Proo is depressed because her brother keeps bossing her around to be the leader of the country. Ocha investigates the story and has to [save the situation],” states the synopsis on the Facebook page Hoidok.

Its just a bit of fun!

The fanart page explained that the cover was inspired by a soap opera “Kiattiyot Kabot Rak” (Honor, Love Rebel) which was broadcast on Channel 3 in 1999. The story centers around two soldiers who are enemies competing both at work and for the heart of the same woman.

Maybe a bit shy of the real truth – no one in Thailand would be unaware of the links between the fictional and the real names.

The competition has added new criteria requiring that artwork should not involve any institutions, politics or religion. Welcome to no fun Thailand.

You can read more on Khaosod English