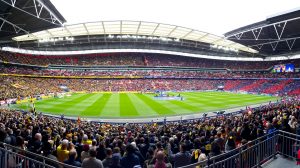 Quique Sanchez Flores is a nomad.

The calls for him to stay at Watford for at least another season ignore the fact that Flores requested that a one year break clause was inserted in his Wtaford contract. Either party can activate this clause.

Flores played for Valencia between 1984 and 1994. In that time the club’s manager changed nine times, including two stints from Guus Hiddink and one, lasting a creditable two years and two months, from Flores’ very own godfather, the late, great Alfredo Di Stefano.

Yes, Flores is related to footballing royalty. That may be why he carries himself with such quiet dignity.

But he is still a nomad. His appointment at Watford last summer was his eighth in 11 years, including two at Getafe and two in the United Arab Emirates before he pitched up in Hertfordshire.

This season Watford were favourites for instant relegation back to the Championship.

Instead Watford’s Premier League status is secure for another season, and teh club reached the FA Cup semi final.

The tam has surpassed all expectations.

Yet Flores may still lose his job this summer when the team’s performance is reviewed.

Watford survived this year. They need to thrive next year. The issue is what division they will be in for 2017-2018 if league results follow the same downward trend they have pursued in the second half of this season.

Watford’s owner Gino Pozzo is ruthless. The Pozzos own Granada and Udinese. They look for affordable footballing mercenaries.

Under Flores this season, Watford took 29 points (1.52 per game) from their first 19 games. In the subsequent 15 games since the midpoint of the season they have amassed 12 points (0.8 per game). While it has been enough to survive, it is not enough to send the club’s owners off on their summer holidays confident about next season.

Less than 12 months ago, Watford’s hierarchy were given short shrift for dispensing with Slavisa Jokanovic , the man who oversaw their promotion, when the two parties could not agree on his new contract.

Watford FC. now epitomises football as a business. It was the right move. There will be no sentimentality at the club preventing them from changing managers again.

Watford is never going to be one of the big clubs. To thrive the owners have to be as ruthless as the players, and managers, who see Vicarage Road as stepping stone to somewhere better.

Consider the warning in the fall of Newcastle United and the rise of Leicester City over the last two seasons. In 2014-2015, Newcastle gathered 26 points from their first 19 games last season at a rate of 1.36 per match. In the second half of that season they accumulated half that, 13, at the rate of 0.68 per match and avoided relegation by three points.

They have carried that form into this season and are currently 19th and one point from safety.

Conversely, last season Leicester City took 13 points (0.68 per game) from the first half of last season and then 28 (1.47 per game) in the second half. There is a lesson there that is not lost on Watford: if you finish the season a certain way, there is a good chance you will start the next season the same, unless radical change is made.

Watford was never the be all and end all for Flores. His time at the club will have been a mutually beneficial relationship, and both will be the better for not hanging around too long to see it fail.