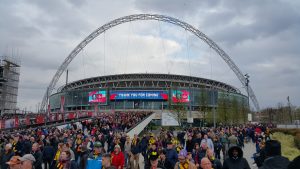 To say Watford were poor is being kind. Crystal Palace had pace, height, strength and desire.

Watford were occasionally easy on the eye. Unusually we had the greater share of possession. But we were devoid of ideas and pace in the last third of the pitch.

Other than Troy Deeney we were were barely present.

The lethargy that has settled into the second half of our season was all too obvious on Sunday.

How much of this is down to the club’s management; how much is down to the owners? The Pozzo track record is impressive yet it is based upon impatience and a massive turnover of players.

It was the Pozzo scouting system that enabled them to take a young Alexis Sanchez to Udinese, benefit from his talent and sell him on for a healthy profit.

Watford made 17 summer signings last year. That the team came together as quickly as they did was a huge achievement. There were more signings in January.

But many of those moves were probably not instigated by the manager. The manager is playing with a deck of cards that is dealt to him.

Players such as Steven Berghuis, Obbi Oulare, Victor Ibarbo and Nordin Amrabat have either barely featured or proved ineffectual.

Yet the transfer policy and the revolving door for both players and managers means that much of the Watford identity has been lost. It is just as well captain Troy Deeney remains a symbol of the club, because there are few others.

Of the cup semi final team how many will survive for next season: the ages are shown because they are relevant to the future.

Pantilimon, 29: must want regular first team football. Could move on.
Nyom, 27: looks like Bambi with a football; unconvincing defender and limited going forward. Expendable.
Britos, 30: too often caught out by pacey forwards. Expendable.
Cathcart, 27: my favourite Watford defender – hope he stays.
Ake, 21: young defender on loan from Chelsea. Looked overwhelmed by Wembley. No surprise that both headed CPFC goals were on his side. Has promise. Would be a good longer term investment.
Jurado, 29: Zero penetration. Lightweight. Dislike. Can go.
Watson, 30: Holding midfielder and master of the square or backward pass. Works hard. Has a role. But needs pace and creativity around him.
Abdi, 27: Has not played enough this season. Anonymous in semi-final. Probably no future at Watford.
Capoue, 27: unfortunate injury in semi-final. Looked influential. At least forward looking. Keep.
Deeney, 27: Mr. 110%. But will he stay? Maybe has only one or two seasons left at the top. He should look for a big money deal. Deserves the big time. Would be a great loss to the fans.
Ighalo, 26: Saw big $$$ signs at the start of the year and has not been the same player since. He is ready to leave. Let him go.
Suarez, 29: Came on as substitute for Capoue in the semi-final. No pace. Might benefit from playing regularly. Keep for a year.
Guedioura, 30: Came on as substitute in the semi-final. Will always be remembered for his wonder strike at the Emirates. But can leave and no one will really notice.
Gomes, 35: Player of the season. Maybe has one more year of top flight football. Has been exceptional and enjoys near cult status. Keep.

The point of the above is that the players that Watford has recruited over the last year are generally older players towards the end of their top-flight careers. They are expendable and many of them will not be at Watford next year.

The Pozzos have revived Watford. But at the expense of its strong connection to the neighbourhood. It is like watching a team of mercenaries playing or fighting under a common flag.

Whoever manages Watford next season will probably be building a new team.

Good luck to CPFC: there is a pleasing narrative to Palace, featuring a lifelong supporter, in Jason Puncheon, and managed by the scorer of their 1990 FA Cup semi-final winner, in Alan Pardew, heading to the final.

The clearing out of the stands at Wembley immediately after the final whistle suggests that I am not alone among Watford fans in thinking that our connection with the club has lost a lot of its value.