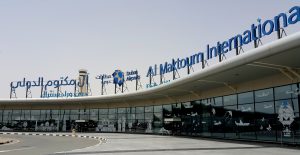 Sir Tim Clark was asked by Aviation Week  magazine to comment on what commercial aviation developments he expects will occur in the next 100 years.

His disappointing response was little more than a plea for greater open skies, allowing EK and other heavyweights to take an ever more global role.

You can read his article in italics below.

To look forward we should look back. It is just 100 years since the first passenger flights; and eighty years ago an  Imperial Airways Hannibal Class Handley Page HP42 passenger flight was landing in Sharjah. To project forward 80 or 100 years we have to regard the A380 as Hannibal.

I accept that advances in technology do not happen at a linear rate. Short segments of phenomenal progress are scattered among decades of boredom.

We can no longer fly supersonic on Concorde. But inevitably in the next 100 years we will be flying supersonic with the ease that we now fly on a 777.

Globalization started in the 20h century. It really started when we found that we could fly. The fact that the two great wars of the century were called world wars is an indication of the changes that were taking place.

Aviation and globalization go hand in hand. But airports are land-grabbing, ever-expanding, expensive-to-run eyesores. The future will be vertical or stol aircraft. Large transports for a growing population and smaller faster supersonic airliners as the new business class.

More personal travel will be by effectively an airborne family car. Probably driverless. Just tell the car where you want to go and the car will be “driven” by satellites.

We will also be in space – as a place to live and work. Though after five decades of exploration, space remains almost completely closed. More humans have won the Nobel Prize (900) than have flown in space (553).

Space will become crowded. Satellites are still a rarity but maybe in the next one hundred years families, cities, universities or companies will build or operate one.

We will start to locate our species on more than just Earth; this may be our most important engineering challenge but will be part of managing our population growth, our global consumption and our need to explore.

In addition protecting our planet and our species from history’s only real significant threat (asteroid/comet impact) should not be overlooked.

Aerospace engineers and researchers will have a critical role in developing technologies needed to achieve both those goals.

These goals will not to met by governments but my curiosity and creativity; by pioneers and entrepreneurs.

30 years ago Emirates airline was a couple of airplanes flying from a desert city that few people had heard of. Today it is the world’s biggest international airline. But it should not be complacent. In thirty years time the world might look very different.

Oddly in his article STC talks about “he early days, (when) civil aviation was considered a public service to bridge continents. Most airlines were state-owned and others, like Pan Am, were supported as instruments of state power.”

The trouble is that is exactly what Emirates is – state-owned and supported as an instrument of state power. The other GCC airlines are similar; indeed some have far more economic support from their governments than Emirates.

The GCC nations enjoy the advantages of geography – in the middle of the Europe, Asian, African triangle. They also enjoy the benefits of labour laws that offer very limited protection to employees and very limited social welfare obligations. It keeps operating costs significantly lower than legacy airlines elsewhere in the world.

The GCC nations also benefit from state funded infrastructures that allow their airlines to fly at any hour of the day from sparkling, modern airfields. It is likely that Dubai will have a new 200 million pax, five runway airport, before poor old London gets a new runway.

But that is about balancing the needs of a country’s citizens against the needs of international airlines and passengers. The UK’s economy is balanced. In Dubai the widely quoted figure is that some 45% of the GDP is connected to the aviation industry.

Just what if we suddenly all stop flying. We connect to eachother through virtual reality. We vacation on holodecks. Is it possible that a more diversified economy is needed?

There seems to be this presumption (and many people in Dubai will argue it) that their airline should be able to fly anywhere that it wishes. It cannot because their has to be reciprocity of benefits from airline traffic rights.

The Canadians would not grant the UAE any additional landing rights. How does the UAE react; by telling the Canadians to leave the UAE and the air force/logistics base that had been established here to support humanitarian efforts in Afghanistan.

If that is not the state acting on behalf of its airline then what is?

STC continues “we need the courage and confidence to compete in the marketplace and resist the temptation to run to governments for protection and state aid.”

The trouble is as outlined above it is not an even playing field. And the GCC carriers are always going to be government supported/protected if only through creating a pro-aviation environment and minimising overheads.

This is Sir Tim Clark’s article in Aviation week:

The world’s first commercial flight took off in Florida on Jan. 1, 1914, just two years before the first issue of Aviation Week was published. That bi-wing flying boat carried one paying passenger 21 mi. from St. Petersburg across the bay to Tampa, taking 23 min. to complete the journey.

Commercial aviation has advanced a great deal since then, particularly with the advent of the jet age in the late 1950s and early ’60s. And it has changed the way people around the world transact and interact.

Today, our industry transports more than 3 billion passengers and 50 million tons of cargo annually, supporting over 57 million jobs and $2.2 trillion in economic activity. We are essential to the functioning of global economies where goods and travelers can reach cities on the other side of the planet in less than a day.

Although commercial aviation has not traditionally been perceived as an “innovative” industry, progress is evident in almost every aspect of our sector of aerospace.

In the 1930s, when an international flight could cost over a year’s wages in real terms, who would have thought it possible to fly for under $100? Who could have imagined a choice of over 80 airlines at a single point of departure, which is now a reality at airports like JFK, Heathrow and Dubai? Who could have foreseen the growth of global air hubs in Asia and the Persian Gulf, or that Europe’s largest airline would be a low-cost carrier with its headquarters in Ireland?

Technology, the world’s changing socio-economics and market liberalization have been great catalysts for progress—making possible new airline business models and innovation that benefits consumers, businesses, economies and our industry.

Economic progress and the middle-class population boom across Asia have created a tremendous swell in air travel demand, spurring the start of new airlines and shifting the balance of air traffic flows eastward.

In the early days, civil aviation was considered a public service to bridge continents. Most airlines were state-owned and others, like Pan Am, were supported as instruments of state power. Fares, flight schedules, seating and sometimes even the food served onboard were government-dictated and regulated.

The need to liberalize aviation was soon recognized in the U.S. and Europe, with both continents at the vanguard of opening markets. The U.S. launched its Airline Deregulation Act in 1978 and pioneered the industry’s first open skies air services agreement in 1992 with the Netherlands; this sparked similar efforts across Europe through the 1980s and ’90s, and more recently in Australia, the U.K., Scandinavia, and parts of Central and Latin America.

Fast-forward 20-plus years, and unfortunately aviation is still one of the most regulated industries.

It is ironic that aviation, an industry that physically and literally connects the world, is itself one of the least “global” industries. There is still a strong government hand in matters such as airline ownership, operating licenses, market entry and access, airport slot allocation and even fare structures. The many legacy systems and interests still in place today prevent normalization of the industry to the detriment of global connectivity and economic prosperity.

From the EU to the International Air Transport Association and International Civil Aviation Organization, everybody calls for more liberalization but progress on this front is lagging. Instead, the recent spate of protectionist rhetoric on both sides of the Atlantic whipped up by a few legacy carriers and their proxies threaten to move our industry backward.

Aside from liberalization, we should also take a long hard look at the entire airline ecosystem and ask ourselves, why—with the exception of recent years, when oil prices are at historic lows—do airlines struggle to deliver decent profits compared to other industries with similarly high barriers to entry?

Are we ready for tomorrow?

As an industry, we still have quite a bit of work to do to ensure we are fighting-fit for the future.

Innovation, speed to market, the willingness to listen to and ability to deliver on consumer preferences are all critical for success in the coming decades. We need to strip out unnecessary complexity and legacy systems that have become entrenched over the years. We need to build our business around our customers rather than archaic systems, and we need to accelerate innovation—whether that is with new business models, new products or new ways of interacting with our customers and partners.

Also, we need the courage and confidence to compete in the marketplace and resist the temptation to run to governments for protection and state aid.

The best environment to foster innovation is one free of government-imposed restrictions, allowing airlines to compete and contest the marketplace. That freedom should also extend to the absence of state aid to airlines that distort competition—whether through government subsidies, loan guarantees, procurement preferences or bankruptcy codes that wipe clean the balance sheets of some countries’ carriers. Policies that support aviation are a plus; programs that prop up individual carriers are not.

Emirates has always championed competition and liberalization. We’ve seen first-hand the benefits of Dubai’s open skies policy for consumers, the economy and the airline industry.

Despite the many success stories, liberalization and deregulation in our sector continues to be difficult, with multiple agendas among stakeholders. In my view, this is the biggest single obstacle to innovation and a healthy industry for the future.

It would be a shame if we were locked into the present and unable to reap the potential of increased liberalization or ecosystem efficiencies. But even if we remained at status quo, the digital age and economic advancement in developing markets will continue to open up new possibilities for trade and businesses and new vistas for consumers, travelers and a globally mobile workforce.

The source and cadence of our traffic flows may change, but overall demand for aviation services will continue to grow as our world becomes ever more interconnected, and it is up to us as individual airlines to identify and serve this demand.

I believe that air travel has a big and even brighter future. The progress that we have made to date is heartening, but we still have a ways to go.