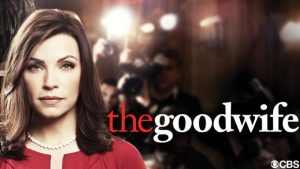 My seven year love affair with this tv program has ended. Oddly no one else I know watches it. Their loss.

The Good Wife was classy television. Its last episode aired last night. It was a modern rarity – a network made show that had depth and personality.

22 episode series are hard to do – tv dramas are now 8 to 13 episodes and made by the likes of HBO or Netflix.

In the UK the last Luther series was just two episodes.

The ending was not what romantics were looking for; a slap; an irreparable breach of trust and friendship. Alicia did not walk off into the sunset with her new man.

Alicia finishes seven years with nothing; other than an education and an uncertain future. But it is a future that she is better equipped to manage.

But in reality she does, at a cost, get what she wants. The chance to start her life afresh. She is not dependent upon anyone.

The great thing about this show is how strongly written it was; with very strong female characters. It had at its heart a feminist beat with a message that was about the importance of charting your own life.

Anyway the following letter is from Robert and Michelle King, Creators and Executive Producers of The Good Wife, on the series finale:

“Thank you” is easy. “Goodbye” is harder.

Thank you for an extraordinary seven seasons of support, encouragement, and commitment to The Good Wife. To say that we could not have done this without you is an understatement.

This is the second time we’ve written you about the creative decisions involved with The Good Wife:—the first was with the end of Will Gardner; now it’s with the end of the series. Both goodbyes involved difficult decisions, and if you found some value in the earlier explanation, you might find some in this one.

We wanted this series—a series that stretched over 156 episodes—to have some shape, some structural meaning. So after we realized we wouldn’t be cancelled after 13 episodes, we started to devise a vanishing point we could write toward. That structure, in our minds, was simple. The show would start with a slap and end with a slap. Each slap would involve Alicia. This would be the bookend. She would slap someone who victimized her at the beginning of the series; and she would be slapped by someone she “victimized” at the end.

In this way, the victim would become the victimizer. This is the education of Alicia Florrick.

Alicia’s character, to us, was about change. Each season she made choices she could never have made the season before. So over the course of seven years, she became tougher, more powerful, more cunning. Of course, we loved Alicia for this. Each decision made sense in the moment, and we forgave her or congratulated her each time. Even her decision in this last episode—the one that resulted in Diane being hurt—came out of her parental need to keep Grace from following in her path. She didn’t want Grace to put her future on hold in order to stand by Peter.

But together all these decisions, legitimate as they were, added up to a character who was becoming more desensitized to her impact. She was becoming more and more like her husband, and, ultimately, Diane was the collateral damage.

That we found interesting. Over seven years could you completely remake your character? Could a victim become a victimizer?

(By the way, parenthetically, that’s the cool thing about TV. It allows you to develop a concept that more resembles life. A character keeps changing over the course of seven years, but instead of reading about it in a novel over a weekend, you experience it over the actual seven years—with actors who age along with their characters—except for Grace who seemed to be 15-years-old for a few years. Sorry.)

One theme we kept returning to over and over in the series was: politics isn’t out there. It’s not something that happens in D.C. or on the news. It happens in our offices, our homes, our marriages. That’s why we ended the series the way we did. Alicia is no longer a victim of politics. She is someone who takes charge, someone who controls the agenda.

On one level this is empowering. It allowed Alicia to control her fate. But it also changed her. Ironically, at the exact moment she found the power to leave Peter, she realized she had become Peter.

And that’s tragic. Yes, Alicia’s story contains tragedy. We still love her. And we hope you do too. The ending is supposed to be unsettling. But we don’t think characters need to avoid tragedy to be embraced. We were tempted to have Alicia chase after a man in the end—stop him from getting on a train or an airplane at the last minute, hold him, kiss him. We like those endings. But there was something false about it here. It isn’t who Alicia is. In the end, the story of Alicia isn’t about who she’ll be with; it’s about who she’ll be.

There is hope in the ending too—we believe. Alicia composes herself and marches toward the future. The two slaps to our mind are chapter endings and headings. If the slap that started the series woke Alicia up—helped her overcome her naivety about her husband and the world’s corruption—then this second slap wakes her up to her own culpability. The question is what will she do with that?

Anyway, we should leave it there. We loved writing this series. We loved the comedy, the drama, the tragedy. We loved the lion telephone with Glenn Childs’ voice. Elsbeth Tascioni facing off with Bob Balaban. Moo Cow. Eli’s raised eyebrow. The Sexual harassment video Alicia and Will were forced to watch. Will clearing Alicia’s desk. Cary’s trip on mushrooms. Diane’s weakness for guns. The YouTube videos the NSA guys sent back and forth.

It’s hard to not write for these characters anymore. They seem very real to us—as if we’ll turn a corner at the market and find Patti Nyholm there shopping for diapers; or turn another corner and find Judge Abernathy Feeling the Bern.

We’ve had fun. Thank you for having fun with us. We’ve also felt sad. Drama embraces both. So thank you for feeling sad with us too. And mostly, thank you for allowing these characters into your home every week for seven years.

It’s been an honor to write for them, as well as for you.

With all our gratitude and affection,