Home→Aviation→flydubai to move to DWC by end 2017…inshallah! 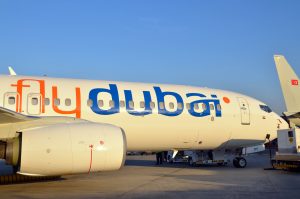 Flydubai will move its entire operation to Dubai’s second airport, Al Maktoum International at Dubai World Central (DWC), by the end of 2017, freeing up space for Emirates to grow at Dubai International.

Dubai Airports confirmed the move in its recent quarterly DWC traffic report. Traffic will continue to grow in part because of the “planned move of flydubai’s entire operation to DWC by end of 2017,” chief executive Paul Griffiths said in the release.

This is the first official confirmation of when flydubai would move to DWC.

It has long been understood that flydubai would be the first major airline to move to DWC. This website has consistently argued that it has to happen sooner rather than later.

flydubai has consistently resisted this move for many very good reasons. It currently operates just a handful of daily flights from DWC.

As the major operator at DXB’s low cost terminal two flydubai is not taking terminal space from Emirates. But most valuable of all flydubai has many arrival and departure slots throughout the day including in the peak morning and late night rush hours. These slots are far more efficiently used by a 400 seat Emirates 777 than by a flydubai 737.

This summer, flydubai’s operations account of 19 per cent of all landings and take-offs at Dubai International, only second to Emirates who account for 40 per cent.

The downside is in access to flydubai’s flights and connectivity between flydubai and Emirates.

As reported elsewhere DWC is remote from most of Dubai. There is no rail access and limited bus service. It is some 70kms from the centrally located DXB to DWC.

For many passengers seeking low fares it will be cheaper and quicker to fly from Sharjah on AirArabia then to pilgrimage out to DWC.

flydubai’s routes include many regional points not served by Emirates. Passengers enjoy baggage handling and visa-free connections between Terminals 2 and 3.

It is unclear what percentage of flyDubai’s customers connect with Emirates but it must be significant and a fast visa free transit will need to be established between DWC and DXB to maintain that model and service passenger demand.

It will be mid 2020s at the earliest before Emirates moves its operations to DWC; so the flydubai – Emirates connectivity will need to be in place for almost a decade.

By comparison, Dubai International can handle today up to 90 million passengers a year and will have an eventual capacity of 118 million by 2023.

Capacity at DWC is to increase to around 25 million passengers a year by the mid 2017 to allow for the flydubai move, up from 5 million today.