Home→Dubai→The Economist on “The breakdown of Arab states” 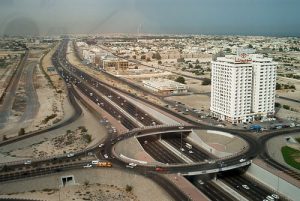 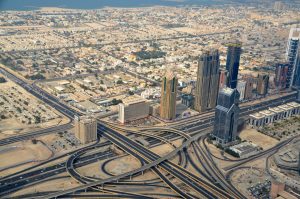 Dubai’s defense roundabout – in 2002 and 2011. The UAE has benefited hugely from an early realization that it’s economy was unsustainable if solely dependent upon oil.

The Economist marked the 100th anniversary of the Sykes-Picot mapping of the Middle East with this provocative editorial. It is a worthy read.

Europe and America made mistakes, but the misery of the Arab world is caused mainly by its own failures. (The Economist – 14 May 2016)

When Sir Mark Sykes and François Georges-Picot secretly drew their lines on the map of the Levant to carve up the Ottoman empire in May 1916, at the height of the first world war, they could scarcely have imagined the mess they would set in train: a century of imperial betrayal and Arab resentment; instability and coups; wars, displacement, occupation and failed peacemaking in Palestine; and almost everywhere oppression, radicalism and terrorism.

In the euphoria of the uprisings in 2011, when one awful Arab autocrat after another was toppled, it seemed as if the Arabs were at last turning towards democracy. Instead their condition is more benighted than ever. Under Abdel-Fattah al-Sisi, Egypt is even more wretched than under the ousted dictator, Hosni Mubarak. The state has broken down in Iraq, Syria, Libya and Yemen. Civil wars rage and sectarianism is rampant, fed by the contest between Iran and Saudi Arabia. The jihadist “caliphate” of Islamic State (IS), the grotesque outgrowth of Sunni rage, is metastasising to other parts of the Arab world.

Bleak as all this may seem, it could become worse still. If the Lebanese civil war of 1975-90 is any gauge, the Syrian one has many years to run. Other places may turn ugly. Algeria faces a leadership crisis; the insurgency in Sinai could spread to Egypt proper; chaos threatens to overwhelm Jordan; Israel could be drawn into the fights on its borders; low oil prices are destabilising Gulf states; and the proxy conflict between Saudi Arabia and Iran might lead to direct fighting.

All this is not so much a clash of civilisations as a war within Arab civilisation. Outsiders cannot fix it—though their actions could help make things a bit better, or a lot worse. First and foremost, a settlement must come from Arabs themselves.

Arab states are suffering a crisis of legitimacy. In a way, they have never got over the fall of the Ottoman empire. The prominent ideologies—Arabism, Islamism and now jihadism—have all sought some greater statehood beyond the frontiers left by the colonisers. Now that states are collapsing, Arabs are reverting to ethnic and religious identities. To some the bloodletting resembles the wars of the former Yugoslavia in the 1990s. Others find parallels with the religious strife of Europe’s Thirty Years War in the 17th century. Whatever the comparison, the crisis of the Arab world is deep and complex. Facile solutions are dangerous. Four ideas, in particular, need to be repudiated.

First, many blame the mayhem on Western powers—from Sykes-Picot to the creation of Israel, the Franco-British takeover of the Suez Canal in 1956 and repeated American interventions. Foreigners have often made things worse; America’s invasion of Iraq in 2003 released its sectarian demons. But the idea that America should turn away from the region—which Barack Obama seems to embrace—can be as destabilising as intervention, as the catastrophe in Syria shows.

Lots of countries have blossomed despite traumatic histories: South Korea and Poland—not to mention Israel. As our special report sets out, the Arab world has suffered from many failures of its own making. Many leaders were despots who masked their autocracy with the rhetoric of Arab unity and the liberation of Palestine (and realised neither). Oil money and other rents allowed rulers to buy loyalty, pay for oppressive security agencies and preserve failing state-led economic models long abandoned by the rest of the world.

A second wrong-headed notion is that redrawing the borders of Arab countries will create more stable states that match the ethnic and religious contours of the population. Not so: there are no neat lines in a region where ethnic groups and sects can change from one village or one street to the next. A new Sykes-Picot risks creating as many injustices as it resolves, and may provoke more bloodshed as all try to grab land and expel rivals. Perhaps the Kurds in Iraq and Syria will go their own way: denied statehood by the colonisers and oppressed by later regimes, they have proved doughty fighters against IS. For the most part, though, decentralisation and federalism offer better answers, and might convince the Kurds to remain within the Arab system. Reducing the powers of the central government should not be seen as further dividing a land that has been unjustly divided. It should instead be seen as the means to reunite states that have already been splintered; the alternative to a looser structure is permanent break-up.

A third ill-advised idea is that Arab autocracy is the way to hold back extremism and chaos. In Egypt Mr Sisi’s rule is proving as oppressive as it is arbitrary and economically incompetent. Popular discontent is growing. In Syria Bashar al-Assad and his allies would like to portray his regime as the only force that can control disorder. The contrary is true: Mr Assad’s violence is the primary cause of the turmoil. Arab authoritarianism is no basis for stability. That much, at least, should have become clear from the uprisings of 2011.

The fourth bad argument is that the disarray is the fault of Islam. Naming the problem as Islam, as Donald Trump and some American conservatives seek to do, is akin to naming Christianity as the cause of Europe’s wars and murderous anti-Semitism: partly true, but of little practical help. Which Islam would that be? The head-chopping sort espoused by IS, the revolutionary-state variety that is decaying in Iran or the political version advocated by the besuited leaders of Ennahda in Tunisia, who now call themselves “Muslim democrats”? To demonise Islam is to strengthen the Manichean vision of IS. The world should instead recognise the variety of thought within Islam, support moderate trends and challenge extremists. Without Islam, no solution is likely to endure.

All this means that resolving the crisis of the Arab world will be slow and hard. Efforts to contain and bring wars to an end are important. This will require the defeat of IS, a political settlement to enfranchise Sunnis in Iraq and Syria, and an accommodation between Iran and Saudi Arabia. It is just as vital to promote reform in countries that have survived the uprisings. Their rulers must change or risk being cast aside. The old tools of power are weaker: oil will remain cheap for a long time and secret policemen cannot stop dissent in a networked world.

Kings and presidents thus have to regain the trust of their people. They will need “input” legitimacy: giving space to critics, whether liberals or Islamists, and ultimately establishing democracy. And they need more of the “output” variety, too: strengthening the rule of law and building productive economies able to thrive in a globalised world. That means getting away from the rentier system and keeping cronies at bay.

America and Europe cannot impose such a transformation. But the West has influence. It can cajole and encourage Arab rulers to enact reforms. And it can help contain the worst forces, such as IS. It should start by supporting the new democracy of Tunisia and political reforms in Morocco—the European Union should, for example, open its markets to north African products. It is important, too, that Saudi Arabia opens its society and succeeds in its reforms to wean itself off oil. The big prize is Egypt. Right now, Mr Sisi is leading the country to disaster, which would be felt across the Arab world and beyond; by contrast, successful liberalisation would lift the whole region.

Without reform, the next backlash is only a matter of time. But there is also a great opportunity. The Arabs could flourish again: they have great rivers, oil, beaches, archaeology, youthful populations, a position astride trade routes and near European markets, and rich intellectual and scientific traditions. If only their leaders and militiamen would see it.