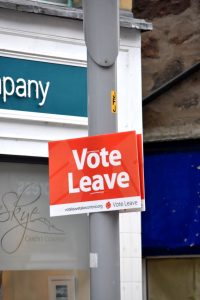 Very relevant commentary from The Economist

“The peevishness of the campaigning has obscured the importance of what is at stake. A vote to quit the European Union on June 23rd, which polls say is a growing possibility, would do grave and lasting harm to the politics and economy of Britain. The loss of one of the EU’s biggest members would gouge a deep wound in the rest of Europe. And, with the likes of Donald Trump and Marine Le Pen fuelling economic nationalism and xenophobia, it would mark a defeat for the liberal order that has underpinned the West’s prosperity.

That, clearly, is not the argument of the voices calling to leave. As with Eurosceptics across the EU, their story is about liberation and history. Quitting the sclerotic, undemocratic EU, the Brexiteers say, would set Britain free to reclaim its sovereign destiny as an outward-looking power. Many of these people claim the mantle of liberalism—the creed that this newspaper has long championed. They sign up to the argument that free trade leads to prosperity. They make the right noises about small government and red tape. They say that their rejection of unlimited EU migration stems not from xenophobia so much as a desire to pick people with the most to offer.

The liberal Leavers are peddling an illusion. On contact with the reality of Brexit, their plans will fall apart. If Britain leaves the EU, it is likely to end up poorer, less open and less innovative. Far from reclaiming its global outlook, it will become less influential and more parochial. And without Britain, all of Europe would be worse off.

Start with the economy. Even those voting Leave accept that there will be short-term damage (see article). More important, Britain is unlikely to thrive in the longer run either. Almost half of its exports go to Europe. Access to the single market is vital for the City and to attract foreign direct investment. Yet to maintain that access, Britain will have to observe EU regulations, contribute to the budget and accept the free movement of people—the very things that Leave says it must avoid. To pretend otherwise is to mislead.

Those who advocate leaving make much of the chance to trade more easily with the rest of the world. That, too, is uncertain. Europe has dozens of trade pacts that Britain would need to replace. It would be a smaller, weaker negotiating partner. The timetable would not be under its control, and the slow, grinding history of trade liberalisation shows that mercantilists tend to have the upper hand.

Nor is unshackling Britain from the EU likely to release a spate of liberal reforms at home. As the campaign has run its course, the Brexit side has stoked voters’ prejudices and pandered to a Little England mentality (see article). Despite Leave’s free-market rhetoric, when a loss-making steelworks at Port Talbot in Wales was in danger of closing, Brexiteers clamoured for state aid and tariff protection that even the supposedly protectionist EU would never allow.

The pandering has been still more shameless over immigration. Leave has warned that millions of Turks are about to invade Britain, which is blatantly false. It has blamed strains on public services like health care and education on immigration, when immigrants, who are net contributors to the exchequer, help Britain foot the bill. It suggests that Britain cannot keep out murderers, rapists and terrorists when, in fact, it can.

Britons like to think of themselves as bracingly free-market. They are quick to blame their woes on red tape from Brussels. In reality, though, they are as addicted to regulation as anyone else. Many of the biggest obstacles to growth—too few new houses, poor infrastructure and a skills gap—stem from British-made regulations. In six years of government, the Tories have failed to dismantle them. Leaving the EU would not make it any easier.

All this should lead to victory for Remain. Indeed, economists, businesspeople and statesmen from around the world have queued up to warn Britain that leaving would be a mistake (though Mr Trump is a fan). Yet in the post-truth politics that is rocking Western democracies, illusions are more alluring than authority.

Thus the Leave campaign scorns the almost universally gloomy economic forecasts of Britain’s prospects outside the EU as the work of “experts” (as if knowledge was a hindrance to understanding). And it dismisses the Remain camp for representing the elite (as if Boris Johnson, its figurehead and an Oxford-educated old Etonian, personified the common man).

The most corrosive of these illusions is that the EU is run by unaccountable bureaucrats who trample on Britain’s sovereignty as they plot a superstate. As our essay explains, the EU is too often seen through the prism of a short period of intense integration in the 1980s—which laid down plans for, among other things, the single market and the euro. In reality, Brussels is dominated by governments who guard their power jealously. Making them more accountable is an argument about democracy, not sovereignty. The answer is not to storm out but to stay and work to create the Europe that Britain wants.

Some Britons despair of their country’s ability to affect what happens in Brussels. Yet Britain has played a decisive role in Europe—ask the French, who spent the 1960s keeping it out of the club. Competition policy, the single market and enlargement to the east were all championed by Britain, and are profoundly in its interests. So long as Britain does not run away and hide, it has every reason to think that it will continue to have a powerful influence, even over the vexed subject of immigration.

True, David Cameron, the prime minister, failed to win deep reform of Britain’s relations with the EU before the referendum. But he put himself in a weak position by asking for help at the last minute, when governments were at loggerheads over the single currency and refugees.

Some Britons see this as a reason to get out, before the doomed edifice comes tumbling down. Yet the idea that quitting would spare Britain is the greatest illusion of all. Even if Britain can leave the EU it cannot leave Europe. The lesson going back centuries is that, because Britain is affected by what happens in Europe, it needs influence there. If Germany is too powerful, Britain should work with France to counterbalance it. If France wants the EU to be less liberal, Britain should work with the Dutch and the Nordics to stop it. If the EU is prospering, Britain needs to share in the good times. If the EU is failing, it has an interest in seeing the pieces land in the right place.

Over the years this newspaper has found much to criticise in the EU. It is an imperfect, at times maddening club. But it is far better than the alternative. We believe that leaving would be a terrible error. It would weaken Europe and it would impoverish and diminish Britain. Our vote goes to Remain.”