Home→europe→Known unknowns for a disUnited Kingdom 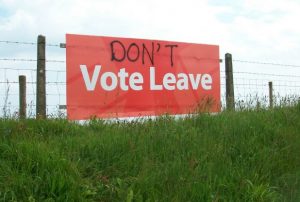 The Brexit vote raises for more questions than it answers. It also appears that the leave campaign was so sure that it would not win that it had few ideas about what to do if they did win.

Firstly it is the remaining 27 EU leaders who have to agree on Britain’s terms of exit. This is an agreement that can impact almost every aspect of modern British life, from the price of milk to the freedom to work elsewhere in Europe. While leaving the EU is Britain’s choice, the UK cannot dictate the exit terms.

How this complex divorce is negotiated and carried out would have a decisive impact on Britain’s economy and its place in the world for generations.

It could be an orderly transition or a much more unpredictable process; what is clear is that the Europeans want to proceed far more quickly that Britain – which has effectively said that it does not want to do anything until October.

There is no precedent for leaving the EU. The negotiation would not just concern divorce, the technical parting of ways and the settling of old bills. It would also have to re-engineer the world’s biggest single market, setting new terms of access and legislating to “renationalise” volumes of law rooted in the EU.

The winners here will be lawyers, consultants and accountants.

House of Commons research has estimated that EU-related law makes up at least a sixth of the UK statute book. That excludes 12,295 EU regulations with direct effect — hundreds of thousands of pages of law, on everything from bank and consumer rules to food standards, which cease to apply the moment Britain leaves.

Britain would also have to renegotiate or reconfirm a web of EU-negotiated free trade deals with dozens of countries that anchor the UK in world commerce but are not automatically inherited if it leaves.

There are  advantages – Britain can remove or remedy bad laws and can better tailor trade to UK interests. Yet as an administrative venture it is huge.

The backdrop to a British decision to leave the EU could be volatile. David Cameron, the UK prime minister, says he will stay on after a leave vote on June 23, but his senior ministers do not believe him. Drawn out divorce talks could be interrupted by elections, not just in the UK (next spring?) but also in the EU behemoths of Germany and France. Then there is the likelihood of a second independence referendum for Scotland, which may want to remain in the bloc. All the time, the EU would be coping with the biggest political upheaval since its inception.

This could be the potential undoing of 70 years of statesmanship.

To prevent the bloc from unraveling, EU countries may seek to punish Britain, so others dare not follow its exit path. The French are already hinting at this.  Whatever is publicly said the EU leaders may well be hostile. Not unreasonably. Cameron was expected to deliver the stay vote that he promised.

Pro-leave politicians argue that Britain’s rights and obligations would remain the same, as would the rule book for business. Champions of Brexit say all sides — from London to Brussels to Berlin — would have the incentive to agree a smooth transition.

They are probably right. Reality is thatt the EU needs Britain to prosper and Britain needs a prosperous EU on its doorstep.

Lawyers are divided on the ground rules for the divorce. There is a so-called “exit clause” in the EU treaties — Article 50 — but it has gaps and is unclear. Brussels insiders joke it was “designed never to be used”.

Senior EU lawyers say it sets arrangements for withdrawal, rather than a future trade relationship. That is a distinction that could matter a great deal.

Article 50 sets departing countries a two-year deadline to agree terms with a weighted majority of remaining EU states. But a comprehensive EU-UK trade deal would require unanimity and national ratification — giving parliaments a veto all the way down to the assembly for the 76,000 strong German-speaking community of Belgium.

Extending talks beyond two years also requires unanimity.e completed in two years, others are much less sure.

As for trade and customs this has not been thought through. Will we erect customs and border posts on the Irish border? It is a choice with potentially serious implications for Northern Ireland’s fragile peace.

The closer that Britain remains to the EU the more the EU would expect Britain to abide by the four basic principles of the single market: the free flow of people, capital, services and goods. But immigration was probably the biggest issue for most leave voters.

Even after a trade deal, a long transition may follow. Senior EU and British officials expect a divorce could take a decade in total. Few expect the negotiations to be calm, or untroubled.

It is all so much more complicated than putting an “x” on a ballot paper – and I am not sure that those who voted leave are in the mind to be patient.