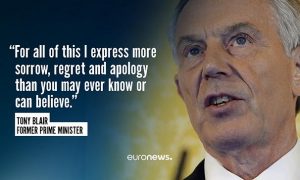 Back on 18 March 2003 in the British House of Commons Brent North MP Barry Gardiner said that not one of his constituency party wanted war, neither did he, but that he would vote with the PM that night “not out of loyalty, but out of conviction he is right”.

Barry Gardiner was a chum of mine at school. He was bright and resourceful. He probably still is.

Now he is a new member of Corbyn’s shadow cabinet. The same Corbyn who yesterday apologised on behalf of the Labour party for its role in the 2003 Iraq war, and warned that the people who took the decisions “laid bare in the Chilcot report” must now face up to the consequences.

Does that include new members of his shadow cabinet?

The Labour leader, who voted against the 2003 invasion, described the war as the most “serious foreign policy calamity of the last 60 years.” war. Corbyn did not name Tony Blair, but said parliament had been misled by a “small number of leading figures in the government” who he said were “none too scrupulous” about how they made their case for war.

It is worth remembering 13 yrs later that on that night, 18 March 2003, the UK Parliament supported military action in Iraq by 412 votes to 149. A day later Britain was at war, albeit as a very junior partner.

Sir John Chilcot’s enquiryr took seven year. His 6,000-page, 12 volume,  report on the Iraq war and occupation delivered a crushing verdict on Tony Blair’s decision to join the US invasion, finding a cascade of mistakes and bad strategy that led to years of devastating mismanagement and strife.

Blair deliberately exaggerated the threat posed by Saddam Hussein;
the UK chose invasion before it had exhausted peaceful options;
British intelligence produced “flawed information”;
the US ignored UK advice on postwar planning;
the British military was poorly prepared for war:
Blair ignored warnings, kept his cabinet in the dark and had no plans for occupation.

The report revealed previously secret letters between Blair and George W Bush, including one in which the then prime minister pledged to the US president: “I will be with you, whatever.”

Six days after invasion, he added: “This is the moment when you can define international politics for the next generation: the true post-cold war world order.”

Blair has responded to the Chilcot report stating that: “I express more sorrow, regret and apology than you can ever know or believe.”

But the former prime minister is defiant and insists he made the right decision. “I believe it is better we took that decision. I acknowledge the mistakes and accept responsibility for them,” he said. “As this report makes clear, there were no lies, there was no deceit.”

Blair also rejected at least nine findings of the report, arguing that:

The intelligence statements made at the time of going to war turned out to be wrong.
The aftermath turned out more hostile, protracted and bloody than we ever imagined.
The coalition planned for one set of ground facts and encountered another.
A nation whose people we wanted to see free and secure from the evil of Saddam became instead victim of sectarian terrorism.

Reg Keys, parent of a soldier killed in Iraq, called Blair’s statement the “ramblings of a madman.”

Iraqis appear to have met the report with the grim sense that it only articulated the obvious: that western hubris and incompetence had created the conditions for years more of strife.

So that is the Blair legacy. Iraq.

His ego; his determination to try and sit at the high table next to the Americans took Britain into a war without a plan; and have led to over a decade of fear and chaos.

Blair won three elections; his governments were responsible for the national minimum wage; investment in public services, particularly the NHS; tax credits to boost the incomes of the low paid; civil partnerships; the Good Friday Agreement on Northern Ireland and devolution for Scotland and Wales.

Back in April 2003 I wrote the following on my web site: there was no victory. Hundreds of thousands of lives have been lost; and Iraq is still living with the devastating consequences of the war and the forces it unleashed.”

“Iraq – this may be a very hollow victory

There are some important questions that need to be quickly addressed if the US and Britain are to emerge from this war with some credit:

Where are the alleged WOMD?
Where is Saddam Hussein?
Why did the invading forces have no plan for Baghdad after its capture?
When will the Americans and British leave?
What sort of regime will they leave behind them?

There are plenty of countries across the world where ruling families, parties, governments and dictators enjoy lavish and excessive lifestyles. There are plenty of regimes that subjogate their people through oppression, imprisonment and torture. But the Americans have not yet invaded each of those.

How this war is judged will not be based upon the relative ease with which the “coalition” forces took Iraq but by the life Iraq’s people live after in the years ahead. The Americans have always assumed that what the people of Iraq want is a prosperous democracy. Maybe we should have asked them first. The recent demonstrations reflect a growing frustration with America and suggest that the people of Iraq would be happy with a safe secure Islamic state.

The current power vacuum is troubling as it suggests a complete lack of planning and a lack of sensitivity to the very real needs of the people that were to be liberated. When Germany and Japan surrendered in the 1940s there was a basic civil service that still functioned. In Iraq – there was no surrender. The rulers of Iraq simply fled and the institutions of government crumbled as anarchy broke out. And what did the invaders do? They certainly did not preserve law and order; they sat back and allowed the looting to happen….looting which for many people was probably more terrifying that the US led bombing. The bombing was targeted and mostly pinpoint in its accuracy. The looting was indiscriminate.

The military victory will look very hollow indeed if law, order, electricity, water, medical care, employment, a working currency (not the US$) and above all else a sense of security and safety are not quickly established.”