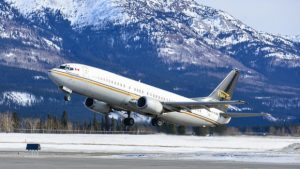 Canada has never really been more than a two airline country. In the past Air Canada basically gobbled up any domestic competition – Canadian, Wardair. Many tried.

Westjet changed that. With (initially) a west Canada focus unlike Montreal based Air Canada. Westjet has become big enough to have permanence.

Porter grew out of Toronto’s downtown airport but is hugely limited by its island based airport with restricted flying hours and turboprops only.

Along comes NewLeaf, the latest air carrier to take to Canada’s skies. The inaugural flight takes off today from Hamilton International Airport to Moncton.

Except that NewLeaf is not an airline. It is a ticket reseller that tries to look like an airline. Kelowna-based Flair Airlines is providing the aircraft and crew.

NewLeaf finally gained approval to fly its 18 routes in March, and resumed ticket sales last month. The airline, considered to be an ultra-low-cost carrier, is hoping to win over Canadians with domestic ticket prices much lower than those of the country’s top carriers.

But with those cheap fares comes a full slate of ancillary fees.

In what may be an airline first (dont encourage others?) NewLeaf will charge for a large carry-on bag, a fee none of the major Canadian airlines have dared introduce. A small personal item is allowed; basically the size of a laptop case.

Interestingly, the airline charges less for a checked bag. (Carry-on luggage slows down the boarding process, the website explains.)

There may be some logic to that.

Like most airlines nowadays you will pay for advance seat selection; printing your boarding pass at the airport will cost you $10, as opposed to doing so for free at home.

Alcoholic beverages, soft drinks and snacks will all be available for purchase during flights.

NewLeaf avoids any capital or hardware costs but reports of unpaid consultant fees and incomplete arrangements for landing fees have raised concerns on NewLeaf’s viability.