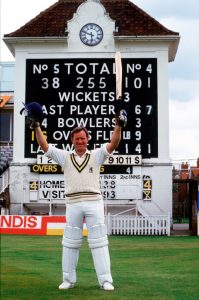 Dennis Amiss was my cricketing hero in the late 1960s and 1970s. A Warwickshire man through and through.

Dad sometimes used to get home early from work and we would head off to Edgbaston for the evening session of a country game. I was still at primary school in Bourneville. I wanted to bat like Bob Barber – except he was a leftie. And I wanted to bowl like David Brown.

Dennis Amiss was just breaking into the Warwickshire team starting as a middle order batsman before moving to opener.

He broke into the Warwickshire side alongside the likes of Bob Barber, MJK Smith, AC Smith, David Brown and Tom Cartwright. Later he played alongside Rohan Kanhai and Alvin Kallicharran.

His England career included playing against some of the fastest bowlers in the world. In 1974/5 he was part of the England tour to Australia terrorised by Dennis Lillee and Jeff Thomson. There were no helmets then.

He also played against the West Indian pace attack with rather more success than against the Aussies.

Two great innings stand out against the West Indies; 262 not out to save the 1973-74 Kingston Test and 203 at The Oval in 1976. Both supplied ample evidence that Dennis Amiss lacked neither courage nor technique against fast bowling.

In that Oval match Michael Holding took 14 wickets in an attack completed by Andy Roberts, Wayne Daniel and Van Holder.

Of Amiss’s 11 Test hundreds, eight exceeded 150, a higher proportion even than that of Don Bradman. His power, timing and placement through extra cover and midwicket, his two great scoring areas, could sometimes make him uncontrollable.

Sadly Amiss’s dismal record against Australia denied him acceptance as a top-ranking England batsman. Starting with a pair, at Old Trafford in 1968, and later running into Dennis Lillee and Jeff Thomson at their fastest, he made seven ducks in 21 innings against them, averaging 15.25.

He did well in the early days of limited-overs internationals, scoring England’s first ODI century and averaging 47.

Amiss was banned from Test cricket for three years for taking part in the first ‘rebel’ tour of South Africa in 1982. Maybe my biggest disappointment with his career choices although financially it probably made some sense for him. 1970s England cricketers were not paid or sponsored as they are now.

The above interview gives a nice friendly overview of his career.

And I found this great blog on Amiss’ remarkable 262 at Kingston.