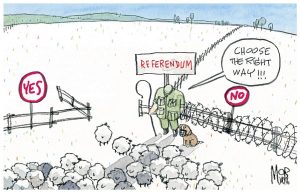 Thailand’s latest constitutional referendum was held today. And the coupe leaders got the blessing that they wanted. The constitution has muted public support.

There are links from AOB to news reports on the vote.

But here is a local Thai commentator. Sadly. He is right.

The Meechai draft is one of the worse constitutions ever written in the history of the country, yet it passed with flying colors.

The military now can handpick at least the next two Prime Ministers after Prayut. Effectively the Thai people, who voted this round, handed our own asses over to the top brass of out of either fear, indifference, ignorance, or worst the simple willingness to be governed under a military regime.

It is going to take an extreme undertaking to alter this new constitution because the way it is written it cannot be amended under the current political architecture. The passing of this drafts lengthens the regime’s hold on power but as a bi-product it immediately turns the political superstructure into a brittle one.

The resistance now perceives that a rejection of the regime is itself one of the very few viable avenues of change. From now, it will be a slow but bumpy ride, with an abrupt ending.

We live in a country where the majority just voted away majority rule. Thank you my fellow citizens for an even more ridiculous answer to an already ridiculous question.”