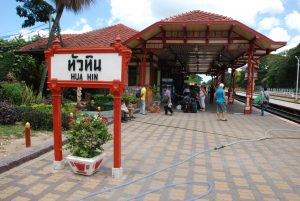 A series of bombings struck Thailand at a variety of locations, including sites popular with tourists, on Thursday night and Friday morning, in what a senior Thai official called a coordinated wave of attacks.

Two bombs went off at the Hua Hin resort in Thailand late Thursday evening, killing one woman and wounding at least 19 people, a local official said.

On Friday morning, more explosions struck in Hua Hin, as well as at the Patong beach at a popular resort island, Phuket, where several people were reported to have been wounded.

At roughly the same time as the Phuket explosions, two explosions were reported near a police station in the province of Surat Thani. Initial reports said one person had been killed there and several wounded.

There was also a bomb in Trang on Thursday.

Totals so far are four dead in nine separate attacks in five provinces. Dozens have been wounded.

Inevitably there are concerns of additional bombs and Hua Hin is effectively on lockdown for the day – which is a public holiday for the Queen’s birthday in Thailand.

Gen. Prawit Wongsuwan, a deputy prime minister in Thailand’s military-run government, said Friday that the attacks were “absolutely conducted by the same network. I believe so. But the investigation is unclear on who actually did it, what are the reasons behind it.’’

Bombings are not uncommon in Thailand’s deep south, where an insurgency has raged, but they are rare in areas frequented by tourists, like Hua Hin and Phuket.

The explosions Thursday night in Hua Hin, which occurred about a half-hour apart, were in an area of bars and nightclubs popular with foreign tourists.

At least nine foreigners were wounded in the second explosion, which went off at a crowded intersection, according to Suthipong Klai-udom, a Hua Hin district official.

Mr. Suthipong said that Germans, Swiss and Italians were among the wounded foreigners, and that the woman who died was a Thai street vendor whose cart was near one of the explosions.

He said the bombs had been hidden in plant pots and detonated by cellphone.