↓
Menu ↓
Home Menu ↓
Skip to primary content
Skip to secondary content
Home→UK→Fate and fortune: the state of Reuters (The Baron) 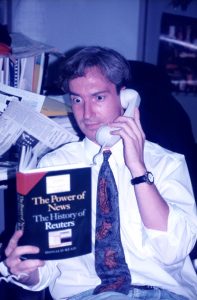 Darren Schuettler (I believe) with the scoop from the Toronto newsroom – 1994.

Editorial from The Baron – and sad reading for anyone who worked in Reuters during the years of rapid growth after 1984, and who found inspiration in the trust principles of independence, integrity and freedom from bias – principles that went far beyond the editorial operations.

“The pages of The Baron have seen much concern recently about the state of Reuters. The fate of a storied institution worries those who worked there in the past and who remain passionately interested in its fortunes as well as those who still do and so care more urgently about its prosperity.

Fierce cost cutting has undermined news gathering and editing in many areas of both visuals and text journalism. The Olympics team was cut to less than half the size at the previous Games with only a handful of sports specialists – part of an ominous shrinking of a once authoritative Sports Desk; weekend desk strength in London has been slashed; and television staffing has been hit badly. A bizarre scheme to move the London desking hub to a provincial English city with no known links to international financial markets or centres of geo-political news was unveiled. Editorial management claimed it would improve global perspective – an assertion met by derisive laughter tinged with tears. Significant content production has been moved to Bangalore and elsewhere and the introduction of sponsored, i.e. paid, content has caused concern about the keystone Reuters commitment to independence and freedom from bias.

Budget cuts are not new. Year after year of ever reduced editorial budgets pre-date the 2008 take-over of Reuters by the Thomson organisation. But since then, there has been a relentless stream of cuts, with insiders saying this year has seen the most brutal editorial cost saving in memory.

As has been pointed out in these pages, the management of Reuters failed to exploit the huge windfall it received after flotation in 1984, making it desperate for money by 2007 when a former mergers and acquisitions lawyer, by then CEO, negotiated the Thomson takeover. The Reuters trustees appear to have ignored Thomson’s reputation for ruthless cost cutting and closing down newspapers when they rubber stamped the deal, apparently without regard for whether the new owners were the best candidates to preserve the Trust Principles.

Nonetheless, what has happened since is surprising. The hard-headed Thomson family, majority owners of the merged business, appear to have pursued a news strategy likely to reduce revenue rather than add to it.

Bloomberg has steadily increased its market share to 33 per cent at the expense of Thomson Reuters which has fallen to 24 per cent, according to the latest industry survey.

Three years after the take-over, a former Wall Street Journal editor was appointed to run the news agency. In turn, the new editor-in-chief hired many of his old colleagues. This “new guard” hubristically seemed hell bent on making Reuters more like the WSJ rather than more likely to make money through selling terminals. The new editors introduced a major emphasis on long-form, magazine-style articles that could take months to create, without providing commensurate additional resources to produce them. The strategy seemed transparently aimed at winning prizes, especially the Pulitzer, and increasing Thomson’s prestige in Washington. But it meant hard-pressed, understaffed bureaux were expected to tie down staff on these projects while still competing with Bloomberg on breaking news – the sine qua non of selling terminals.

After howls of anguish by the sales force, there has been some retreat from this strategy. Yet it still exists, causing frustration and loss of morale among ever more stretched journalists facing constant cost cutting and unable to serve two masters at once. While there has been some outstanding and revelatory investigative journalism, much of the time-consuming long-form output has been judged by old hands to be mediocre, digging into news events in great detail long after interest has moved on. The practice has made an institution out of the dropped lead.

Equal frustration was caused by the hiring of big money columnists who blurred the line between facts and opinion at a time when front-line staff devoted to breaking news were being cut back in regions of traditional strength like the Middle East. Reuters’ historic supremacy there is now under threat.

The changes also weakened Reuters’ central culture of delivering reliable news across the board faster than its competitors. So-called Top News desks have been created in the main editing centres where it is deemed acceptable to take several hours, or in some cases days, to “perfect” updates or sidebars on major news events. These units, dubbed “Stop News” by frustrated correspondents in the Americas, have the right to cherry pick each day’s stories, even if more experienced and qualified colleagues are available on the rump editing desks. This has demoralised both correspondents in the field and sub-editors reduced to handling crumbs from the Top News table, some of whose staff are considered by their peers to be less than elite. A cumbersome and morale-sapping system for pitching stand-back stories in detail before they can be written has introduced more delay, while feuding among senior editorial staff in London has further confused journalists.

Traditional media is in difficulty across the globe and cost cutting is by no means confined to Reuters.

Reuters’ excellence still exists, as top coverage of several recent world stories demonstrates. But what frustrates many talented journalists is how shrinking resources are spread thinner by being divided among different tasks and different masters. Pulitzers may look good and are a justifiable source of pride, but they don’t sell terminals and do not pay the wages.

The fear of some of those who value Reuters, its global reach and its extraordinary reputation for accurate, fast and unbiased news, is that the Thomson organisation will dump the agency once it has got what it wants in terms of influence and prestige and seeks once again to maximise its profits.

If that happens and a new buyer cannot be found, those who allowed it to happen will bear a heavy responsibility for destroying a much respected 165-year-old institution through hubris and mistaken strategy.”