Home→Aviation→Sully – losing sight of the facts 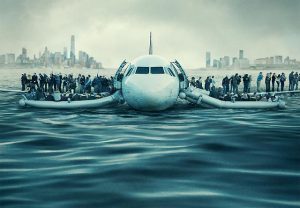 On January 15, 2009, the world witnessed the “Miracle on the Hudson” when Captain “Sully” Sullenberger piloted his stricken US AIrways A320 for a water landing on New York’s Hudson River.

The plane had struck a flock of Canada geese on departure from La Guardia airport, losing thrust in both engines as just 2,900 feet.

Now almost eight years later the story of flight 1549 has been made into a movie directed by Clint Eastwood with Tom Hanks as Capt Sullenberger. It is not a role that challenges him greatly but it is a role that fits – the portrait of a man who is decent, capable, and almost flamboyant in his humility. 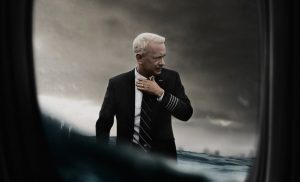 Aaron Eckhart as Jeff Skiles (the first officer on  1549) is also very solid.

“Sully” the movie focuses on two things – one real, one fictional; the real story is of unlikely, modest heroes who become reluctant celebrities.

I liked the movie – but the portrayal of the NTSB investigation as adversarial is misleading. This was another team doing its job; just as Sullenberger’s team had done its job.

The film implies that the human factor was only brought into the simulations at Sullenberger’s request at the public hearing. Not accurate at all – yet it is a key moment in the movie.

The facts are simply that the National Transportation Safety Board (NTSB) investigation and public hearing that followed were anticlimactic—the crew, including the three flight attendants on board, had done the right thing, according to the board’s final report.

The film is based upon Sully’s best-selling book, Highest Duty. But his book barely mentions the NTSB’s investigation.

The only way Eastwood can think of to surprise us is by making up stuff that didn’t happen and then lodging it in Sully’s nightmares.

The NTSB appears as a swaggering tribunal of investigators who torment Sully and Skiles for days immediately after the accident, not just questioning their decisions, but contradicting their accounts. Their minds are made up – the airliner could have safely returned to either La Guardia or Teterborough.

Sully and Skiles are shocked, traumatized by the NTSB statements; Sully fears losing not just his reputation, but his whole livelihood: “I’ve got 40 years in the air, but in the end, I’m going to be judged on 208 seconds.” And so it goes, for much of the movie’s 96-minute run.

In fact, the NTSB was never consulted or even contacted by anyone connected with the film; there is no one named Charles Porter at the agency (the chief investigator in the movie); and his two film colleagues, “Ben Edwards” and “Elizabeth Davis,” are also phony.

There is so much attention to detail in the movie – the US Air uniforms, the quick reference handbook; the wording used from the cockpit voice recorder.

Yet almost all the details surrounding the NTSB are simply wrong. In the movie there is a scene of the hearing where the pilots confront the cockpit voice recording of the flight for the very first time. In fact, pilots are always given a chance to listen to it privately, usually well before the hearing, and the audio is never played in any type of public forum. (Printed excerpts of the dialogue were displayed at the actual hearing to accompany a video recreating the flight.)

Asked about the NTSB criticism, Warner Brothers have declined to answer questions, as have Sully himself and his co-pilot Skiles, who is back in the cockpit and now a captain for American Airlines.

What leaves me really uneasy is why Sullenberger has played along with this portrayal of the NTSB. Sully has talked and written about the stresses he experienced post-accident and the self-doubts he experienced, and his worries over the results of the NTSB probe are undoubtedly genuine.

Sully had, and has, his own safety consultancy. He was close with pilots union; who are well represented in the movie.

The NTSB does some remarkable work – often in appalling circumstances. They deserve rather more credit than this movie gives them. Sully owes them more than a sullied reputation.

This is a pretty good review of the movie – noting its accurate depiction of the flight but the cinematic license taken with the investigation:

Sully and the Impossible Turn