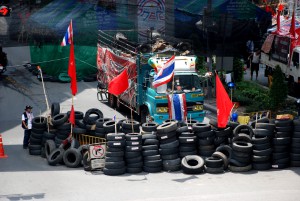 (Depressingly accurate analysis from the Economist – although missing one key ingredient that is critical to this new constitution – the fact that the army needs to control the government through the looming royal succession.)

In August voters endorsed Thailand’s latest constitution in a tightly controlled referendum that offered no alternative to the draft put forward by the ruling military junta. It may take a year before the rubberstamp assembly ratifies it. By the time it comes into force, it will be the country’s 20th constitution in 85 years. Why does Thailand keep changing its constitution?

In a word: coups. Since the replacement of its absolute monarchy with a nominally constitutional one in 1932, the army has been Thailand’s most powerful political force. It has usually wielded its power in symbiosis with a traditional elite comprising the monarchy, aristocrats and interrelated wealthy families. The civilian elites have provided a cloak of legitimacy and administrative skill, while the army has supplied the means of suppressing those who wish to be ruled by neither group. But Thailand’s close diplomatic, military and economic ties with America and other Western countries, combined with calls from Thai citizens for greater representation, have required keeping up democratic appearances. This has led to a cycle of liberalisation, growing political participation and eventually elite-backed military coups to claw back power from politicians. But clinging to power for too long carries its own risks, so coupmakers must find ways to step aside without relinquishing the benefits they seized.

Hence the importance of constitutions, whose purpose is to consolidate a coup’s gains. The 2007 constitution, which followed a coup the previous year against Thaksin Shinawatra, then the prime minister, created an array of appointed “independent” bodies and politicised courts that brought down three democratically chosen prime ministers including his sister, Yingluck Shinawatra. That wasn’t enough to neutralise Mr Thaksin’s popularity.

So after a 2014 coup against the remnants of Yingluck’s government, which had been elected in 2011, the latest constitution goes even further to hobble elected politicians. Which is not to say that Thai charters fail to go on at great length about citizens’ rights and obligations and other constitutional boilerplate—the current one, the longest yet, is 105 pages.

Their principal function, however, is to divide the spoils of power between the army and elites while leaving everyone else enough crumbs to prevent rebellion. To satisfy the army, a constitution must not take away too much of its post-coup privilege. To satisfy traditional elites, a constitution has to perpetuate their control over the bureaucracy and guarantee the power of the monarchy, from which their benefits trickle down.

For most others—as the relatively wide margin of victory for last month’s referendum seems to indicate—a constitution can win approval simply by offering a chance at political participation, even if the game is rigged.

In their eagerness to make up for the “wasted coup” of 2006, however, this constitution’s drafters appear to have overreached. The new electoral system is designed specifically to stifle parties linked to Mr Thaksin, who remains hugely popular, and whose supporters have been prevented from protesting by harsh restrictions.

The generals’ plans to lead the government after elections also threaten a rift with their royalist allies. Strains in the relationship have emerged, with pro-coup politicians openly criticising the junta’s leadership and its charter. In the 1990s a similar rift led to the relatively democratic constitution of 1997, a product of elites’ misguided belief that they could rule without military help.

If the purpose of a Thai coup is to turn back the clock, the point of the constitution that follows is to freeze the hands in place. The generals have proven they can accomplish the first task efficiently, even as the second is likely to remain beyond their abilities.