Home→people→Thirty years on – a tale from the Vicarage 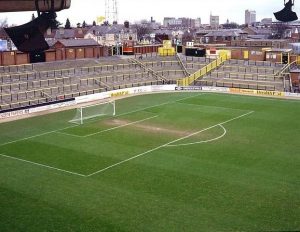 It is 30 years, almost to the day, since Watford last defeated Manchester United.

The following notes were written on Tales from the Vicarage – a little bit of Watford history and why so many people feel connected to the club and the club to the community.

“On Tuesday, September 16, 1986, Ron Atkinson’s side visited Vicarage Road during a poor start to their season and amid speculation that Big Ron’s days were numbered.

Watford were just starting their fifth season in the top flight. It would turn out to be Graham Taylor’s final campaign before heading to Aston Villa and this match was one of the last ‘Special Vicarage Road Nights Under the Lights’ of his first ten years in charge.

So much about a football club changes over the years. The players and coaches come and go – and pretty rapidly at Watford – the ownership changes hands. The things that remain, the tangibles that give us our sense of identity, are the name, the badge, the colours and, for Watford, the ground.

As we’ve seen with recent attempts to rebrand Hull City as Hull Tigers, a club’s name is sacrosanct. Can you imagine Watford trying to add ‘United’ or any other suffix to the name, perhaps in order to appeal to overseas viewers? The colours can be tinkered with (red shorts or black?), but not dramatically altered, without too much fuss. However unloved the ‘moose’ emblem may be by some, it’s been our badge since the late 1970s when then chief executive Eddie Plumley hired a London design agency to get rid of the old cartoon Hornet and come up with something that reflected the club’s Hertfordshire roots. As Plumley told me for my book, Enjoy the Game: ‘The brief was to come up with some new, to get away from the old. As soon as we saw it, we went with it. It was very striking.’

And then there’s the ground, the place we call home. Watford moved round the corner from Cassio Road to Vicarage Road in 1922. The ground has changed over the years but it’s still ours. In 1986, the old Shrodells stand was replaced by what was first called the Rous Stand (named after the former FIFA president and Watford Boys Grammar School teacher), now the Graham Taylor Stand. Coincidentally, Manchester United were the final opponents the Shrodells looked out on before going to grandstand heaven.

Hundreds of supporters will have sat in the same seat in the upper tier of the Graham Taylor Stand for close to three decades. Hundreds more will have occupied the same space in the Rookery Stand since August 1999 when the home end was moved south and allocated seating was introduced. Dozens of people feel they are part of the fabric of the place, having bought a brick displaying their name. These bricks are on display around the ground, many of them purchased as tributes to loved ones who have passed away. And although the club no longer allows supporters’ ashes to be scattered on the pitch, I know of at least one fan who scattered his dad’s secretly and without permission at the Vicarage Road End of the ground in the 1990s.

And so our little bit of space in WD18 is part of the heat-map of our lives as we journey to-and-fro every fortnight or so, often treading the exact same path to the exact same spot. Imagine having to change all that one August.

That’s not to say Watford haven’t considered moving the ground in the past. After all, it’s not exactly the ideal location, hemmed in by the hospital on one side, Occupation Road on the other and Vicarage Road at the top. There once was plenty of space to move south, but the disastrous decision by previous owners in the last decade to allow flats to attach themselves like barnacles to the south-east corner hampers more development.

In the 1990s, as the game sought to recover from an era of hooliganism and the disastrous consequences of putting up fences to contain fans – which contributed to the Hillsborough disaster – clubs were ordered to make their grounds all-seater. For some that meant looking elsewhere, abandoning their old Victorian-era grounds and over a decade or so a rash of identikit stadia sprung up from Middlesbrough and Hull to Leicester and Derby to Southampton and back up to Sunderland. As smart and functional as they were, they were often distinguished from each other only by the colour of the plastic seats and the name of the title sponsor. By the 1990s, Watford – now owned by Jack Petchey – had neither the funds nor the desire to relocate and instead redeveloped Vicarage Road the most cost-effective way, by selling Paul Furlong and Bruce Dyer to build mirror-image stands at each end of the ground.

Watford could have blazed this particular trail in the late 1970s had it not been for the intransigence of the local council. Elton John and the board recognised the limitations of Vicarage Road and the difficulties of developing it. They wanted to move a few hundred yards south, onto the allotments and beyond, possibly turning the pitch 90 degrees and constructing a completely covered 35,000-capacity stadium. This was before seating was mandatory and so both ends behind the goals would have been standing. There was also to be a sports centre, a 5,000-seat concert venue, possibly a cinema – all funded by attracting private companies and outside investors. Two supermarket chains were also approached to see if they wanted to build a retail park adjacent to the new ground.

But the council was not impressed. The club was still in the Third Division when the plans were originally drawn up and the council felt they were too grandiose. They didn’t share Elton’s vision of First Division and European football at Vicarage Road. They refused to entertain the idea of relocating the allotments, they said they’d never give permission for supermarkets to be situated out of town for fear of damaging the high street.

Watford were ahead of their time, of course, because 20 years later there was a spate of arranged marriages between football grounds and retail parks, not all of which have turned out happily.

Frustrated by the council’s lack of vision, Watford looked elsewhere in the borough. The most suitable site was down on Orphanage Road, near Watford Junction on land that is now the link road. The club also looked in Leavesden and identified another seven possible sites around the town and further afield. Jarman Park in Hemel Hempstead was also mentioned and the council in Milton Keynes offered some land at a knock-down price but Eddie Plumley said Watford were never serious about moving away from the town, although they were happy to suggest the idea in order to put pressure on the council to agree to their plans in Watford. A possible ground-share with Luton, though reported as a possibility in the local press, was never, ever considered.

So, Watford had to stay at Vicarage Road and make the best of it. Successive plans for a roof over the Vicarage Road end were turned down, and Graham Taylor made a point of never having a covered dug-out for the managers, coaches and substitutes until the fans were covered too. Finally, in the mid-1980s, Watford made some headway and the West Stand, as it was initially called, was planned. The club were keen to build something with a bit of character, not just a flat-pack stand assembled straight out of the box, and so settled on the quirky roof design. By the standards of the day, it cost a fortune, and it was months before temporary seats were installed downstairs and years before the lower tier was completed properly.

Anyway, the point of all this is that Watford remained at Vicarage Road and although the value of land in this corner of south-west Hertfordshire means the possibility of a sale to a developer is never too far away, the cost of relocating, and the pressure on land around Watford, makes it unlikely.

One of the most reassuring aspects of the Pozzos’ ownership has been the improvements to the ground, the desire to smarten up the place. Building the Sir Elton John Stand is of course the most notable development but the other touches and details around the ground – photographs of former players that conjure up golden moments from the past – strengthen the emotional bond with the place.

And that’s important because a club’s present is an accumulation of all those past moments. The Elton John and Graham Taylor Stands look out on the same space where all those great moments created by the chairman and manager’s team happened. The Rookery Stand is home to close to 7,000 seats now but back in the day it was just cinder and wild blackberry bushes. But it’s the same place.

The pitch and goalposts may have moved over the years, but Vicarage Road is home, and so when the teams ran out on Sunday morning, 30 years and a couple of days since Watford’s last victory over United, it was possible for those who were there to look at the right-hand side of the penalty area at the Rookery end and remember the moment when the teenage striker Iwan Roberts ran onto a neat through-ball and rifled a low shot into the bottom corner of the net past Chris Turner.

Or think back to the previous year, when a rampant Watford side destroyed United 5-1, although it should probably be acknowledged that the visitors had their eyes on the FA Cup final a few days later.

Or think back a bit futher to the early January day in 1982 when Jan Lohman stuck the ball in at the second attempt (just a few yards from the spot where Roberts would later score) to knock United out of the FA Cup.

Or think back even further to February 1969 when United’s European Cup-winning holy trinity of Charlton, Best and Law glided over the mud to win an FA Cup replay 2-0.

Because all those things happened in the same place and they are all a part of the club we know today.”