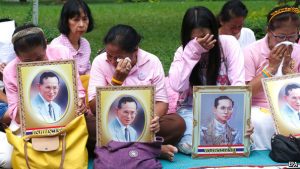 The time of death was 3.52pm with an official announcement at 7pm.

King Bhumibol was 88 years old, and had reigned for 70 years.

The King had never been fully conscious in recent months; kept alive by doctors and ventilators. His death will have been peaceful.

There are many better written obituaries – some linked on this page. King Bhumibol of Thailand – obituaries and other reports

So the following are just a few thoughts.

Bhumibol was the heart of the Thai nation. His reign saw the nation transformed from a largely rural, agrarian nation still recovering from Japanese wartime influence into a modern, vibrant, worldly nation; the doors were opened to foreign investment and to mass tourism.

Bangkok has become one of the must visit cities of the world.

Thailand is at the heart of modern globalisation; while preserving traditions and culture its people have for the most part seen a significant rise in their prosperity during the King’s reign.

He was the preeminent symbol of the country supported by lavish public affection.

But his rule remains an enigma. He was cultured, outwardly modern, jazz-loving and in appearance, modest.

But his reign is something of an enigma. Severe laws ban any negative comment about the royal family. Royal portraits are in every office and most homes. Thais have been educated to accept their King as a near deity.

He became a near sacred figure for many Thais during a time of extraordinary transformation in Thai society. He has been the one constant in that time and his death leaves a profound sense of absence and loss.

The Thai monarchy was weak in 1946 – the new King set about rebuildng its prestige. He became a symbol of national unity – his image being the softer side of the Thai military governments that have dominated Thailand for much of his rule.

But he departs with questions that may never be answered; including the events around his succession and the role of the royal court in suppressing the student uprising on 1976.

Perhaps the real tragedy is that with his popularity the King could really have been a force for positive change rather than the continuation of a divided society under a harsh military rule.

He could have encouraged debate and criticism within Thai society; his 2005 birthday speech hinted at it. But when a populist Prime Minister became too powerful the King, or at least his name, was used in support of the 2006 coup.

It may be today that we are not just mourning the King but also mourning what Thailand has become, and the loss of what it could have been.

As for what happens next General Prayuth was quick to announce that Crown Prince Vajiralongkorn would become Rama X.

His appointment was expected to be announced at the emergency NLA meeting in Bangkok last night.

But the Crown Prince has said that he wants time to mourn with the Thai people before becoming the new King; his ceremony would in fact be months into the future anyway.

Journalists in Thailand  cannot talk very safely about the Crown Prince  so due to the lese majeste laws a full picture of the new king can only come from outside the country.

Whatever happens next a new era in Thailand has begun.