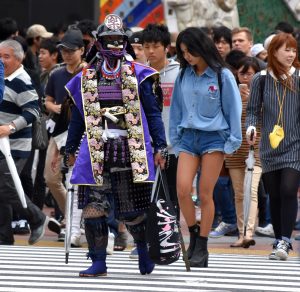 A visit to Japan is always a pleasure. Tai and I were there for two weeks at the beginning of October. Starting in Kyoto, then Hiroshima, Osaka, Takayama, Matsumoto, Kawaguchiko (Mt Fuji) and Tokyo.

A country that seemlessly combines tradition and modernity; a nation with respect at its heart; a nation where manners matter, where food is such a part of life and tradition.

The big cities are amazing in their efficiency; millions of people managed, transported, fed and housed. The countryside makes for such a contrast with smaller towns, full of character, all so well connected to the bigger cities.

It is the little things that make you love the people and the country.

I heard a car horn once in two weeks. And that was because I was in the middle of the road taking photographs!

We were on Miyajima Island. Tai had been eating some grilled squid.There was no rubbish bin. She is carrying a used plate and wooden skewers. A storekeeper sees her and asks if he can take her garbage for her. Find my anywhere else where a storekeeper would offer to do that.

The lady in the food hall in Tokyo who helped Tai try and but some rice tea with incredible charm and not a word of English.

The incredibly courteous service at our hotel at Mt Fuji. Actually anywhere that we went; but this was exceptional with a traditional Japanese dinner. 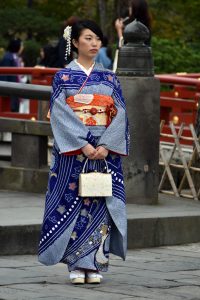 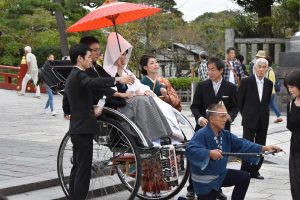 In Hiroshima we headed out for dinner. Small place – four other people there sitting around a grill. Just two staff. No English menu. But the cook says, between words and hand signals, that he will cook for us. Outstanding. Warm, friendly. It might have felt like we were intruding on a gathering of friends. Not at all.

I was so impressed by Hiroshima. So much tragedy, so carefully remembered. No anger, just a simple message of peace. And now, just over 70 years later a very proud, modern city.

Taxi drivers that speak no English – but between google maps and their gps are happy to drive you, will always help with luggage and will always say thank you.

Hyperdia.com – the solution to all train travel in Japan. And ticket offices where almost no English is spoken but where the staff are happy to help.

Wonderful train network across the country. Well used and civilized – no misbehaviour tolerated.

I felt guilty every time that I wanted to cross a road at a red signal. Even if there was no traffic. Even guiltier if I actually crossed. Stared at by our shocked Japanese hosts.

Ingenious miniaturisation. The world’s smallest ironing boards! But everything actually fits into some of the smallest hotel rooms you will stay it. But why does anyone want to sleep and sit on the floor?

Neon. Everywhere in the cities.

Japanese railway stations – wonderful places. Some like Kyoto are architectural masterpieces. Full of people and life. But everyone unfailingly courteous. Food everywhere. Eat-in. Take-away. Shops. Vending machines. Platforms all marked so you know where your coach is.

Restaurants that open late. Need a decent meal in a big city after 10pm. No problem at all. 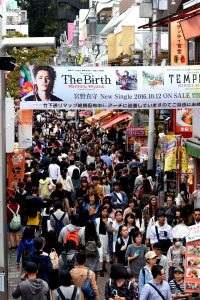 A friend recently described the Japanese as “the most decent, gracious, respectful and downright “nice” (in the most positive possible interpretation of that word there can be) people on the planet.” He is right.

In my dream world the Japanese repopulate Dubai and this would become a much more enjoyable place to live.

The downsides – if you have a 7 day railpass the temptation is to use it as much as possible to get the best value. The trouble with that is you do not get long to experience each town or city.

And Tokyo is a big, exhausting city. Trying to see and do too much can really drain any remaining energy. It is not just tourists who are tired. In any subway town at any time of day there are people with closed eyes.

As we approach the end of Tai’s time with Emirates I do start to wonder how many of these countries we will revisit. But Japan will be on the list.