Does the South East of England need a new runway?

The government and London’s business types seem determined that the answer is yes.

The British government confirmed today that a third runway will be built at Heathrow to allow thousands more flights a year at the London airport.

In a long-awaited response, the government has endorsed the recommendation of the Airports Commission to expand Heathrow rather than Gatwick airport, which had hoped to build a second runway.

The move comes six years after the Conservative-led coalition scrapped previous plans for a third runway at Heathrow.

The decision to grow Heathrow will be voted on by parliament in 2017 or 2018. Under the airport’s proposed scheme, an additional runway and a sixth terminal will be built to the northwest of the existing airport perimeter at a cost of £17.6bn, demolishing the nearby village of Harmondsworth.

Widespread protests and legal challenges are expected to follow the decision, with campaigners expected to focus on air quality, noise and Britain’s climate change commitments.

The runway, which could be built by 2025, would mean almost 50% more planes over London, bringing new neighbourhoods under the flightpath.

The last runway built in the UK was Manchester’s second runway. The most recent to be extended was Birmingham.

The UK’s regional airports continue to grow – aided by the likes of Emirates and Qatar Air. They are increasingly attracting new flights from Europe and the USA.

So why expand Heathrow? 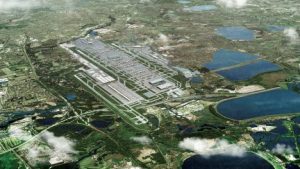 The trouble with Heathrow is that an airport that was great for the 1950s is less that great for the 2050s. The airport is too close to the west end of London; there really is no room to expand without massive local demolition. And the flight paths over Central London add to the city’s noise pollution.

The airport is full. Night time take offs and landings are heavily restricted. Landing slots trade for millions of pounds.

There is Gatwick. London’s second airport with rail lines into London and the City. At just 30 to 40 minutes by train this is as close as many international airports to their main city centres….eg Hong Kong and Seoul. The trouble is the rai service is dismal. A little investment in rolling stock and track and Gatwick works.

Gatwick has just a single runway. This is a bit of a nonsense for a major international airport. A second runway allowing simultaneous landings and departures would transform Gatwick.

Then there is Stansted. Again the rail connections are already there. Access to the city of London is excellent. To the west and south less so. It needs to move passed its perception as a base for the LCCs.

Greenpeace has reiterated that it will, with local councils around Heathrow, take legal action if a third runway at the UK’s biggest airport is given the go-ahead.

Jeremy Taylor, from Gatwick Diamond Business, told the BBC it is “disappointing” that Heathrow is the frontrunner. He also said that a third runway at the capital’s largest airport is unviable, partly because of the level of opposition to it, and a decision in favour of expansion there would just be “delaying the day when we see a second runway coming to Gatwick”.

Heathrow’s backers argue that the airport is a major international hub. Not really. There is some transfer traffic – mainly for British Airways – but the majority of flights are origin and destination. For many Brits Dubai is their hub airport – connecting from their regional UK airport to destinations across Asia and Africa.

Theresa May said the decision was made to boost jobs and growth and to ensure the country’s success post-Brexit. The department for transport said would deliver economic benefits to passengers and the wider economy worth up to £61 billion and create up to 77,000 new local jobs over the next 14 years. But her cabinet is split with her Foreign and Education secretaries opposed to the Heathrow expansion.

The foreign secretary claimed the project would cause “inevitable degradation” to the quality of life of people under the potential new flight paths.
He said: A third runway is undeliverable. The day when the bulldozers appear is a long way off, if indeed they ever materialise.

Johnson said the new runway would create a “hell” of aircraft noise above London adding that “no other great city would do this to its inhabitants. New York is going to be the city of beautiful skyscrapers, Paris the city of lights and London in the future, if we go ahead with this project, will be known as the city of planes.”

As for the future he said that “I think it very likely it will be stopped. We have been here before and we are going to see an inevitable fight in the courts and I think the chances of success for the proponents of the third runway are not high.”

For once – and I don’t say this often – Boris is probably right. There will be so many legal processes; so many protests. The government has chosen the hardest option to deliver and in doing so it simply may never happen.