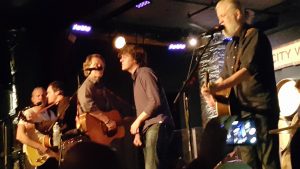 City Winery near the Village in Manhattan. A full house packed in seated at small tables.

Restricted views anywhere to the left and right of the stage. So while we could hear Mike Boguski we could not see him.

As in Nashville the show opened with Devin Cuddy. The same set as before.

And then Blue Rodeo. By the end of the opener, Heart Like Mine, there was already more energy than at Nashville. More energy from the band and from the audience. Tonight the band looked like they were having fun….and it made for a much better concert with more chat to the audience. 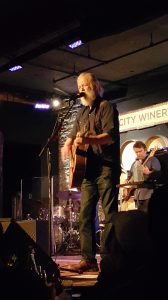 But it is still strange watching the show while working through a decent Shiraz. And there was no room to push back our chairs and stand up to sing along.

The set list – I reckon that was eight songs off the new album. And it felt like a longer set than Nashville. Though I suspect both were 17 songs in total.

One of the objectives of the new album was to have the band singing together more – more emphasis on harmonies rather than individual songs from Cuddy and Keelor. And it shows it the choice of songs, both the new material and the older songs.

Heart Like Mine
Hard to Remember
Superstar
What Am I doing here
One more night
Jimmy Fall Down
Long Hard Life
Disappear
I can’t hide this anymore
Mascara Tears
1,000 Arms
Dust to Gold
You’re everywhere
5 Days in May

Head over heels
Try
Hasn’t hit me yet

Nice evening finishing with a fine audience sing-along to Hasn’t Hit me Yet. Tai was tired. She had flown in from Dubai in the morning. “Are they finished yet?” she would ask as her eyes closed! But I am happy she was there.