Home→Aviation→The Economist on the future of the A380 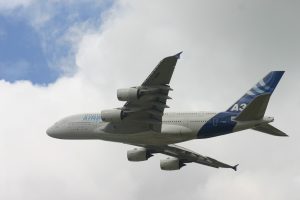 The Economist has shared its thoughts on the future of the Airbus A380 in this article. See below.

The issue for Emirates is that its own growth and success is so closely tied to this airplane. Dubai International Airport has no room for new flights at peak times. The only way to add capacity has been to upgrade flights to the double decker aircraft. This will remain the case until Emirates can eventually move to the new airport at DWC; but that will not happen until 2025 at the earliest.

For popular holiday routes or for flights to airports with capacity constraints the A380 serves Emirates well. Heathrow, Bangkok, Sydney, New York, Toronto. There are also routes that Emirates would like to serve with A380s into China and India where EK has to live with inter-government rights-restrictions.

But the issue is where can Emirates profitably fly the rest of its fleet of high capacity planes. We may well see a decision to convert a part of the remaining A380 order into lower capacity twin engined A350s. That would be the end of the A380.

Three years ago Emirates rescued the A380 aeroplane. Its own problems now cast doubt on the super-jumbo’s future

At the world’s major airports, plane-spotters often spend days waiting for the world’s largest passenger plane, the Airbus A380, to make an appearance. The nerds at Dubai International Airport are spoilt for choice. It is home to Emirates, an airline that owns 86 of the monster aircraft, almost half of the global A380 fleet. These planes have propelled Emirates from insignificance a decade ago to its position as the world’s biggest carrier (measured by international passenger mileage in 2015). Now the airline has hit a rough patch. That is bad news for Airbus, the European aerospace and defence giant which makes the A380, and for the plane itself.

Demand once seemed insatiable for flights through Emirates’ hub in Dubai, which is known in the industry as a “super-connector” airport. Now its location helps explain the airline’s difficulties as well as its spectacular past growth, says its president, Sir Tim Clark. When he helped set up the airline in 1985, he says, Dubai was “an enchanting Arab village” that generated little air traffic. Instead of filling up the planes with locals, his strategy was to use its position halfway between Asia and Europe to connect flights between cities that lacked obvious links, such as Cairo and Shanghai or Moscow and Cape Town.

Connecting these “strange city pairs”, as he puts it, led to soaring passenger numbers. A string of purchases of A380s, starting in 2008, helped traffic to more than double to 51m in 2015. Good airport facilities and access to cheap labour (even expatriate pilots are inexpensive in Dubai because of low taxes) contributed to profits as well: the airline has the lowest costs of any long-haul carrier in the world.

But over the past year or so problems have mounted. Low oil prices have hit the economies of many of Dubai’s neighbours, reducing regional passenger traffic. Terrorist attacks in cities and airports in Europe and the Middle East have dampened tourism activity generally.

Although Dubai itself is safe, conflict in Iraq, Syria and Yemen, as well as Turkey’s attempted military coup in July, are prompting passengers to choose other connecting cities. Currency volatility has also meant abrupt drops in revenue on some routes. “We used to have one of these business-damaging events once a year but now we have them more than once a month,” groans Sir Tim. In the year to March, Emirates made a record $1.9bn in profits, but since April its earnings have tumbled by 75%. Weak demand has forced it to slash its fares to keep planes full.

Emirates can take some solace from the fact that its super-connector rivals in the Middle East—Etihad of Abu Dhabi, Qatar Airways and Turkish Airlines—are also hurting. Turkish Airlines has had to suspend flights on 22 routes and mothball 30 planes. Industry analysts reckon the airline will this year suffer its first annual loss for a decade. Qatar and Etihad may also end up in the red.

Tricky geopolitics is nothing new for Emirates, which was founded during the Iran-Iraq war, argues Sir Tim. Dubai is trying to boost its own tourism industry, which should help replace some of the connecting passengers the airline is losing. No one doubts that it will pull through.

Emirates’ appetite for the A380 is a different story. That may dwindle more quickly than Airbus had anticipated. On December 2nd the first planes in a new batch of super-jumbos are due to arrive in Dubai. In total, Emirates has a further 56 A380s on order: 31 are to be delivered between now and 2019, with another 25 due to arrive in the 2020s to replace older ones nearing retirement. Emirates rescued the A380 programme with its last big order in 2013. The airline had wanted to buy another 200 A380s equipped with more fuel-efficient engines. But in current conditions Sir Tim says there is little chance of his airline making another large order anytime soon.

Airbus has orders for only another 18 super-jumbos from other airlines that are likely to be delivered and paid for, according to Richard Aboulafia of the Teal Group, a consultancy in Virginia. The manufacturer has already cut planned production, but may still run out of customers for even this diminished number.

So Airbus is on the hunt for new buyers in China and Japan, places where runways are most congested and the need for larger planes is most acute (the firm originally gave the A380 its name because eight is considered lucky in some Asian countries). Chinese airlines have only bought five so far but the hope is they might buy more now that the country’s aviation regulator, a noted super-jumbo sceptic, retired earlier this year. If they are not willing to step up, as Emirates once did, plane-spotters will have even more reason to cherish their sightings of the A380.