Home→USA→The fall of the American empire 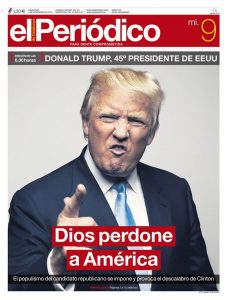 Empires have risen and fallen throughout history.

They have all been rich nations using their wealth to become early proponents of globalization. The real difference was that their globalization was not based upon trade between nations for mutual benefit but based upon complete control of nations that were colonised, controlled and managed for the good of the ruling nation.

The Japanese empire ended the day that the USA dropped the atomic bomb on Hiroshima.  The American empire arguably started that day. The USA became the dominant force in Asia and had become the leading force in NATO. The US went as far as to occupy a number of countries including Germany, Japan and the Philippines.

The British Empire was in terminal post-war decline. The USA had saved the world from Nazi-ism and from a cruel Japanese domination of Asia.

But the US empire died in November 2016 with the election of Donald Trump as the 45th President of the USA.

A man and a regime that will be tested from day one. In North Korea, Russia, China and others there will be whole departments already planning aggressive geopolitical and trade action to challenge America’s new administration. And the only likely reaction appears to be a Trump twitter-storm. All noise. But I do not see a coherent foreign and defence policy. I see a nation looking in, building walls and protectionism; not a nation that will seek to provide a moral compass for the rest of the world.

Global threat is back. Russia, led by the strongman Putin, has taken a lead role in the Middle East because other world powers and influencers have walked away. Russian influence will then extend to the FSU states and to de-stabilizing Europe and undermining the NATO alliance.

China, led by the strongman Xi Jinping, will dominate Asia and increasingly the world economy. Japan will be forced to look to China as a difficult best friend as America walks away from its Asian allies. Korea similarly. An emboldened North Korea could see the next four years as an opportunity.

As Edward Luce wrote today in the FT, Obama is a fundamentally decent leader who has strived to make the case for international co-operation to a world that was not really listening. “Mr Obama came bearing hope. He leaves warning against fear.”

I was on an airplane flying to Los Angeles a week before the election. The nice woman sitting at the window was born in California from a Pakistani family who she had just flown home to visit. She is a surgeon; specialising (if my memory is right in liver and kidney treatments). SIngle, mid-thirties, smart, articulate. Exactly the sort of remarkable success story that the USA should be proud of.

And she was fearful of what a Trump presidency would mean for her, her profession, her nation and her family’s home country.

Where would you live to escape this world I asked. Belize she said; as soon as she could afford to! She may well be right.