Home→Aviation→Farewell John Glenn – you truly were the right stuff. 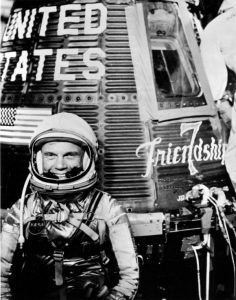 John Glenn died on 8 December. He was 95. Glenn was a folk hero to anyone who grew up in the 1960s and looked towards the skies and thought about space flight. He was the right stuff and so much more.

He was the last survivor of the original seven Mercury pilots. He was the first American to orbit the earth – in 1962 in his Mercury capsule, Friendship Seven, at the heart of the cold war with Russia. He later became the oldest man to fly in space. That takes courage.

In his political history of the space age, “…The Heavens and the Earth,” the author Walter A. McDougall described Mr. Glenn’s space mission as a “national catharsis unparalleled.”

“It seemed that he had given Americans back their self-respect,” Mr. McDougall added, “and more than that — it seemed Americans dared again to hope.”

Here is the Economist’s obituary:

“Too big, too unschooled, too old—only narrowly did John Glenn gain entry to the training programme which would make him America’s space hero. To meet NASA’s size requirements, he briskly lost 28lb (nearly 13kg) and even put books on his head to try to squeeze a little off his height.

True, nothing could be done about his lack of academic qualifications: he had dropped out of his engineering course in 1941 after learning to fly. But what flying it was: 149 combat missions, first against Japan in the Pacific, then in the Korean war, returning from one of them with more than 200 bullet-holes in his plane’s fuselage. It earned him six Distinguished Flying Crosses and 18 clusters on his Air Medal. And he was a celebrity already, having just made America’s first transcontinental supersonic flight, in a record three hours 23 minutes, testing a new Air Force fighter.

America’s spirits needed lifting in 1959. The Soviet Union’s space programme seemed unstoppable. Communist scientists had put the first satellite, the first dog, and the first man into orbit. America’s efforts flared and fizzled on the launch pad. Despite the mishaps, there was intense competition for the privilege of perching in a flimsy metal capsule on top of 100-plus tons of rocket fuel. It was a competition ideally suited made for the clean-cut, God-fearing, intensely competitive mid-Westerner. Some found his austere approach irritating—though Mr Glenn insisted he was not the “pious saint”, nor the other guys the “hellions” depicted in the film version of Tom Wolfe’s “The Right Stuff”.

Gloom and ire alike ended on February 20th 1962. To the words “Godspeed, John Glenn” from Mission Control he and America’s spirits soared to the heavens in the Friendship 7 spacecraft. In the space of four hours and 55 minutes he saw three sunrises, orbiting the earth at more than 17,000mph.

He was puzzled by what looked like fireflies on the window. A sign of malfunction on the spacecraft? A sign of failing eyesight? A celestial mirage, or even (some wondered) a miracle? Later it turned out that they were frozen crystals of condensation, catching the sunlight.

The run-up had been nerve-racking, with 10 delays stretching over two months. But once in orbit, a more serious worry dawned. Some controls in the capsule had apparently failed, meaning that the astronaut would have to calculate the angle of his re-entry to the earth’s atmosphere. Worse (but also wrongly) NASA had received a signal suggesting that the capsule’s heat shield had broken loose. In the final minutes of the flight, his pulse raced from 87 to 132.

After a flawless splashdown, he reached Cape Canaveral, to be greeted and decorated on the spot by President John Kennedy. In New York, 4m people turned out for a ticker-tape parade. Mr Glenn ranked with the Wright Brothers and Charles Lindbergh in the American pantheon. He received a standing ovation from a joint session of Congress—and was so popular, the BBC’s Alastair Cooke said only half-jokingly, that he could have “abolished the Constitution and been proclaimed president overnight”.

His success had opened the way for the moon landings yet his popularity kept him earthbound. Without his knowledge, JFK ruled out any more space flights for America’s idol—he was too precious to lose. And perhaps more useful elsewhere. The Kennedys urged him to enter politics. Frailer souls might have been daunted their fate; in 1968 it was Mr Glenn, an aide and family friend, who had to break the news to Bobby Kennedy’s children that their father had been assassinated.

His early steps in politics were faltering. But in 1974 he stormed through the Democratic senate primary in Ohio after his rival, a wealthy businessman, implied that the challenger had lacked real-world experience. With cosmic scorn, Mr Glenn suggested that his opponent visit a veterans’ hospital and “look those men with mangled bodies in the eyes and tell them they didn’t hold a job”.

He was a model senator, with only one whiff of scandal in 24 years, when he unwisely associated with Charles Keating, a fraudster in search of a bail-out. A moderate Democrat, he promoted environmentalism, nuclear non-proliferation and (of course) space travel: it wasn’t a question of whether America could afford it, but whether it could afford not to, he argued. He strongly defended evolution, saying science and religious belief did not clash: they reinforced each other. He had seen more of God’s creation than most people, he would note.

But the legislature was his ceiling: he was too dull a speaker, too bad at delegating and, oddly for someone so famous, lacked the sparkle needed for a real run at the presidency. His only bid for the Democratic nomination, in 1984, crashed amid humiliation and debts.

In 1998, aged 77, he became the oldest person to go into space—in theory to study its ageing effects, but in truth a favour from his friend President Bill Clinton, most reckoned. Few begrudged him his last hurrah. Only at the age of 90 did he give up flying: old people, he said, should not let the calendar dictate their lives.”