Home→Aviation→The Boeing 787 – a threat to the Middle East hubs? 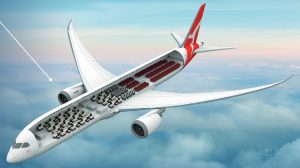 So Qantas has announced that it will fly its Boeing 787 non stop from Perth to London from March 2018.

At the moment Qantas codeshares on Emirates flights from Perth to Dubai and onto Europe. Now Qantas will compete with its own codeshare partner and will by-pass Dubai.

Currently, Qantas flies daily from both Melbourne and Sydney to London via Dubai with the A380. It is the airline’s only destination in Europe.

Qantas is due to take delivery of the first of eight 787-9s on firm order in October 2017.

Boeing lists the 787-9 as having a range of 7,635nm when carrying 290 passengers in a two-class configuration.

Qantas believe that the aircraft would be able to fly the likes of Perth-London Heathrow (7,829nm), Melbourne-Dallas/Fort Worth (7,814nm) and Sydney-Chicago (8,022nm).

Why does this announcement matter to Dubai? The range of the 787 is a real threat to the superhub concept on which the three big Middle East airlines thrive. The 787 is ideal for long, thin routes of which there are many.

Just one of the many issues that Emirates is facing; but this one is long term and may significantly slow the rate of growth of the mega-hubs.

The A380 really works best on the primary routes which are slot restricted. The 787 allows airlines to bypass the major hubs.

It is likely that Emirates will need to place an order for 787s in the near future to operate long-haul routes where a smaller capacity airliner is needed.

Take the thought a stage further; does global air travel need three mega airports in the middle east. Does it make long term sense for the UAE to invest in both Dubai and Abu Dhabi. I argued years ago that a combined hub at DWC for Abu Dhabi and Dubai with a single national carrier made greater long term economic sense.

But when it comes to airlines pride can get in the way of logic and economics. And while both airlines continue to make money the two UAE based airlines will continue to operate independently.