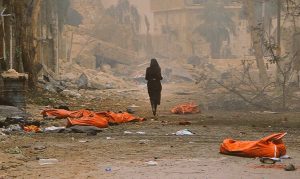 I am sitting here in the comfort of my Dubai apartment; all I have to complain about is the incessant construction noise.

I lead a life that is safe, sane and fortunate. The nearest I get to Syria is overflying at 35,000 feet in tin-can comfort, oblivious to the tragedy below.

I, like so many, have ignored for too long, the tragedy that is Aleppo. Of course there are others. But today Aleppo is our greatest failure as a civilized world.

It is hard to tell right and wrong in Syria. But what is clearly wrong is the slaughter of innocent civilians and the documented use of chemical weapons.

Depending on your personal view, Aleppo has now fallen, or been retaken, or been liberated. But my interest is not with any political side. It is with the victims of a civil war that has been raging for more than five years.

The international community – and our leaders – have failed not just to end the war, but to understand the brutality of this conflict. The UN, through the Security Council has been just words. Any resolution has blocked by Russia, and disappointingly, also by China.

The war in Syria is not simply a war against terrorists – Isis and al-Nusra, the al-Qaida franchise in Syria – although this is the narrative the Russian Federation and its allies want us to believe.

Russia’s propaganda machine is forcefully promoting the fall of Aleppo as the “liberation” of a population described as hostages of Islamic terrorists.

The war started as a peaceful insurrection in 2011, an uprising in the long chain of the Arab Spring. The movement turned to arms, and then turned into a civil war and a humanitarian catastrophe.

Syria has become a proxy war; Yemen of course is another. It could have been stopped long ago.

When Obama ruled out any form of US ground involvement Russia stepped in. Aligned with Assad. The west left Aleppo to rot. The legacy is seen in millions of refugees, the thousands of homes destroyed, the millions of children who are uneducated, and the roll call of the dead.

Assad has been helped into a winning position by Iran and Russia. Iran has had effective strategic control over how the war is run for the past three years.

From above, the scale and reach of Russian firepower has rained down on a city that has successfully sheltered insurrections throughout the ages. The devastation of eastern Aleppo is staggering.

Aleppo’s suffering has been long and agonising. The west has failed to provide any effective response. The UN is humiliated. Russia emboldened. Aleppo will join an infamous list of cities whose names are synonymous with mass crimes committed while the world looked impotently on.

One commentary on Facebook says more than I can write here:

“#Aleppo did not fall. Aleppo resisted. Aleppo fought. Aleppo looked evil straight in the eye and did not bow down. Aleppo gave its blood sweat and tears. Aleppo stood up to the Pharaoh of this age and did not surrender. Aleppo was starved, bombed, raped, mutilated, tortured, mocked, but, Aleppo stood. Aleppo. Did. Not. Fall.

Humanity fell. The world looked on as evil ripped apart the heart of Aleppo. The very same world which said never again after Hitler, stood and watched silently as Aleppo bled. Aleppo will forever live on far beyond this worthless earth. The innocent martyrs, the men, women, children, young and old of Aleppo will leave behind a legacy of resistance. The rest of us will just be an example of cowardice…

Aleppo. Did. Not. Fall. Humanity fell.

Right or wrong. in 2016 no one should be living under the brutality of war.

The misery and uncertainty is not over yet.