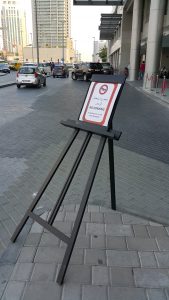 Anywhere that calls itself The Billionaire Mansion deserves abuse. Such a pretentious name. And clearly targeting a certain demographic.

It is a nightclub, not a Mansion. Think up-market Rattlesnake rather than Hugh Hefner.

And yes earlier in 2016 a Billionaire Mansion nightclub opened in Dubai, unfortunately in the Taj Hotel next to our apartment building.

The concept comes from Italian entrepreneur and F1 boss Flavio Briatore. A man with a very checkered (pun intended!) history involving formula One race-fixing, accusations of tax fraud, supermodel partners half his age, and the list goes on.

The club includes a Japanese restaurant, an Italian grill, a karaoke lounge, a nightclub and a shisha terrace.

All well and good until they pile out into the limited parking area outside the Taj Hotel at 3am.

Singapore’s Bay Capital investment group is the majority shareholder after it acquired the majority of the leisure and entertainment unit of the Billionaire brand from Briatore. Briatore is both a close friend of former prime minister and bung-bunga party host Silvio Berlusconi as well as a supporter of Donald Trump.

Siddharth Mehta, chairman of Far East Leisure, Bay Capital’s portfolio company, said the clubs were “a statement of style and luxury and we believe that there is great potential in taking the brand to the world’s elite.”

Just what the neighbourhood needs.

Mr Briatore has remained with the company and appears to have a Dubai base.

The club actively uses social media to hype its events and regular nights. Here are a few gems. And some of the hype is truly over the top!

“Let’s get this ladies night party started with Billion Her! Ladies prepare for a night of dancing and complimentary drinks. Every Friday between 8PM and 12:30 be part of an astounding ladies night!

“MonroeNights – Get yourself lost in a moment with great atmosphere, a distinguished crowd and the hippest tracks that altogether provide the perfect recipe for a crazy night of dancing and fun! ***This week’s giveaway include diamond watches from the luxury brand Balmain!***Complimentary Drinks For Ladies.”

There are also Special events:

“Because every single moment should be remembered. Because you should not settle for anything less than something ineffable. You are invited to join us for a Golden New Year Celebration. Exquisite cuisine, refinement and world class entertainment. Finely chosen ingredients, attentively created dishes paired with the most delicate wines and champagnes.

Plus experience the magic of the spectacle of Burj Khalifa fireworks at midnight! Our festive and luxurious set menu is available at a rate of AED 2500 including beverages!”

By the way AED2,500 is the cheap no bubbly package! Ouch!

And most oddly of all – “Maestro Andrea Bocelli, the greatest ever Italian classical tenor, recording artist, and singer-songwriter, will be performing live in an exclusive evening at Dubai’s Number one nightlife venue, on Saturday, January 7th 2017.

This extraordinary Gala Dinner is set to be one of the most unforgettable events Dubai’s social calendar has ever seen. Exclusively at Billionaire Mansion and for one evening only, Mr Bocelli’s performance will be a unique experience for a select group of privileged guests. The one-off live performance was born from Mr Bocelli’s friendship with Flavio Briatore, owner of Billionaire. Hosting Bocelli at the newly opened venue has been a dream for Briatore, and Mr Bocelli has accepted with enthusiasm his long-standing friend’s invitation. Mr Bocelli will be performing live for 40 minutes with his loyal companion, his piano.”

You would have through that with so much money passing through its doors that the club could sort out its traffic problems! The best they can do is a cheap little sign and even that has gone.

So at 3am every morning that the club is open there is a barrage of car horns from taxis and rich-kid cars trying to leave from the limited space outside the Taj hotel. And no-one wants to take responsibility for sorting the problem out.

The hotel and the club say it is not their responsibility. The RTA says there is nothing they can do. The municipality says call the police. The police say contact the property owner.

It is Dubai – the more money you splash around the less you have to comply with the norms of respectful behaviour and common sense.