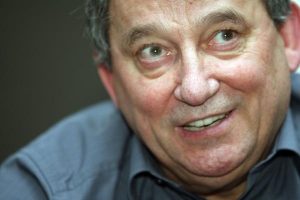 In 1977 Elton John, then President of Watford FC, heeded the words of Don Revie and approached Graham Taylor, the young Lincoln manager about a move to Watford.

But Elton had a vision and money.

In five years the Elton John Taylor-made army moved from the 4th to second place in the 1st division where we finished second to Liverpool.

We were in Europe he next season playing in the UEFA cup.

In April 2004 we were at Wembley for the FA Cup final. We lost 0-2 to Everton; but as always with Taylor, we lost with grace and not rancour.

In the process Taylor created the country’s first ‘family club’ and cultivated a relationship with the community which still reaps the benefits now, 39 years after he took over the club.

A playing career which included spells at Grimsby Town and Lincoln City ended prematurely for Taylor at the age of 28. He quickly developed a reputation as a talented manager, guiding Lincoln to the Fourth Division title in 1976.

A year later superstar Sir Elton John, who grew up in Pinner and was already on the Watford board, became the club’s chairman and started looking for a replacement for Mike Keen.

Taylor tells the story of his first meeting with Elton John:

“I said to him ‘why are you so excited?’” Taylor recalled: “Elton replied with ‘would you believe it but this is the first thing I have done on my own. I usually have agents and people doing the negotiations and things like this. This has always been my club and now I am the chairman. I’m so excited because the England manager has recommended you and I want to sign you.

“I was brought up in Scunthorpe, had played for Grimsby and Lincoln and here he was offering me a five-year contract. I said ‘what do you expect from me [in those five years]?’ He responded with ‘I want to be playing in Europe’. I mean he actually said that. I thought, blimey this bloke is not right in the head. I said ‘and how much do you think that will cost, to get from the middle of the Fourth Division to the top of the First Division in five years?’ He replied with ‘I don’t know, what do you think?’ It was 1977 and I thought right, well this will frighten him off; I said ‘you won’t get any change out a million pounds.’ Elton replied with ‘right, let’s give it a go.’”

It may have taken him an extra year, but that is exactly what the duo achieved together.

Taylor’s first decade in charge of Watford between 1977 and 1987 is a period of time that many fans look back on as one of the happiest moments of their lives. Me included.

The impact he had on the club’s supporters and the town as a whole is hard to quantify. One of the main reasons that period was so special for the fans was the togetherness created by the club’s community work, at a time when hooliganism plagued English football.

The pinnacle of Taylor’s time at Watford was arguably reaching the 1984 FA Cup final. He acknowledged a few players struggled to perform that day and has still not watched the game back 30 years on, despite having a video cassette of the contest in his house throughout that time.

Actually – for many of us the pinnacle was the last game of the season win at home to Liverpool that took us to second place in the first division. Or maybe the ridiculous UEFA cup win against Kaiserslauten.

The game changed – and in fairness Graham Taylor could not make that change. In Taylor’s words: “The biggest reason I left football was that I didn’t like the way it was going. I saw wealthy non-football people running football clubs. A lot of these people are very successful businessmen but what football gave them was celebrity status. There are far too many people like that and they try to run their football club like their other businesses. They want people who report directly to them, like a CEO or a finance director, and they are non-football people too.

“I would have to adapt to that and, rightly or wrongly, I couldn’t. I learned that when I went back to Aston Villa the second time.”

Watford of course has had to move on at the same time simply to stay competitive. It still has an identity but not in the same way that it did in the 1980s.

Times have changed – but it is impossible not to look back on that time without having a huge grin at some wonderful, happy memories.