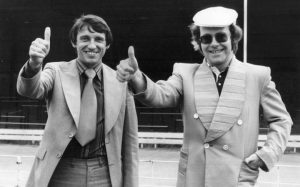 Graham Taylor – by Ian Grant for the Watford fanzine – Blind, Stupid and Desperate.

This article was not written as an obituary – it is an older article. But it is word perfect in its tribute to Graham Taylor.

“I’ve been writing about Watford for more than five years now. In that time, I’ve tried to find ways of describing all kinds of things – players I’ve never seen, matches ranging from the irretrievably dismal to the insanely dramatic – and rambled pointlessly on about plenty of stuff that’s got nothing to do with anything at all.

This is by far the most difficult article I’ve had to write.

I mean, what do you say? Where do you start? How do you squeeze the enormity of Graham Taylor’s achievements at Watford and elsewhere into a few hundred words without doing them a gross injustice? Further, how do you also find space to tell of his influence away from the pitch, as a person as well as a manager?

The thing is, every club in the world has its own greatest manager. Some are famous, some are remembered only by the fans who supported their teams from the terraces. Some, Port Vale’s John Rudge in particular, have even had the dubious distinction of being lauded by me.

Yet Graham Taylor is not merely the most successful manager in the history of Watford Football Club. In so many ways, that’s only a small part of it, a means to an end. The full story cannot be told by statistics, no matter how impressive they are. So I’ll mention his quite staggering record at an essentially small, limited club – five promotions, a top flight runners-up spot, Europe, the FA Cup Final – only in passing.

Anyone who went to Old Trafford in our Premiership season will know that there’s more to life than just winning, that nothing is uglier than graceless victory. Although the extra qualities that Graham Taylor has brought to Watford – humanity, humility, humour, to name but three – may no longer be considered important in the brave new world of the Premiership, they’re the absolute essence of what makes football such a vital part of so many lives.

When Watford fans refer to him as “God”, I always wince a little. It does him a huge disservice, I think. The wonderful thing about Graham Taylor is that he’s most definitely made of flesh and bone. Like the rest of us, he’s human – he makes mistakes occasionally, he gets told off by his family, he tells jokes of variable quality, he talks a lot, he sometimes embarrasses us by singing on “Match Of The Day”. He’s not someone to worship, he’s someone to love…and there’s a huge difference.

He built a football club in his own image. It was proudly proclaimed as “The Family Club” yet, in reality, it was much more than that – it was a club without cynicism. With Graham Taylor at the helm, Watford was (and is) allowed to dream, to submit to an innocent belief in infinite possibility. It would be childish and naive, were it not for the simple fact that history records the dream coming true not once but twice.

The football played has so often shone with the same innocence. With a few exceptions – the outrageous 6-3 annihilation of Grimsby in 1996 springs to mind, when we were slightly disappointed and unfortunate to be only four-nil up after twenty minutes – the insatiable attacking and consequently extraordinary scorelines have not been such a prominent feature of his second spell in charge. But talk to any Watford fan of a certain age about his first spell and they’ll tell of a time when we were not just successful, but brilliant and dashing and thrilling and heroic too.

Crucially, and unlike most who’ve followed in our footsteps, we rose from the depths not by being ugly and negative. We rose by playing football that appeared to be exploiting a loophole in the laws of the game (surely attacking like lunatics and trying to score thirty-seven goals in every match was, at the very least, not sporting?) and that delighted as many as it offended. In following a script that could’ve been based on any imaginative school playground kickabout or a fan’s fanciful daydream, it was a defiant and triumphant return to the true meaning of “the people’s game”.

Times have changed, of course. Graham Taylor’s changed too. Anyone who watched us in the Premiership will have seen how remote the possibility of an 8-0 win was – we don’t play like that anymore, and we’d have been slaughtered on the counter-attack if we’d tried. But, although they may not have played with the abandon of their predecessors, compensation was to be found in a team spirit that, at key moments, bordered on the fanatical. Again, in its honesty and endeavour and essential humanity, the team bore the unmistakable mark of its manager.

The famous victories at Craven Cottage, Wembley, and Anfield have been well-documented, as has the ill-fated struggle to avoid relegation from the Premiership. What has not been said often enough, however, is that clubs which collect only fifteen points by mid-March rarely do anything but disintegrate in spectacular fashion. We have not followed that pattern. Despite enduring a punishing and demoralising season, followed by a disappointing slide out of promotion contention, we have not allowed so-called “failure” to tear us apart. There may have been more celebrated achievements, but Graham Taylor leaves behind a legacy of financial stability, excellent health, and long-term vision. He has done much more than manage a football team.

Enough history, though. No tribute to Graham Taylor should concentrate only on football, as if he was just doing a job. The simple fact is that my admiration for his ability as a manager is dwarfed by something more personal and even more heart-felt.

It’s about a basic approach to life, a fundamental philosophy. It’s about treating people as you’d wish to be treated yourself, with respect and courtesy. It’s about reacting to success and failure with the same dignity, good grace and humour. It’s about standing your ground and fighting for what you believe, obstinately if necessary, while also acknowledging the right of others to do the same. It’s about being humble enough to admit mistakes and concerned enough to try to correct them. It’s about putting community wealth before personal gain. It’s about all these things, and more.

That many will choose to remember Graham Taylor for a slew of frustrated swear-words in a TV documentary is, ultimately, their loss. Watford fans have had a closer relationship with this remarkable, charming man over the years, and have seen the way that his basic approach to life illuminates everything he’s involved in. We are truly fortunate that our club has been one of those things.

So, to return to my original question, what do you say? Well, cringe-worthy or not, there’s really only one thing to say….

(First published in “The Yellow Experience”)