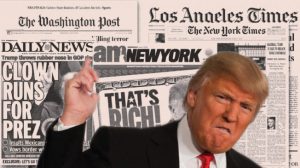 On Facebook yesterday a US based friend posted a comment with (his or her 🙂 ) thoughts on the media.

“I do not trust the media. I quit watching and reading most of it, over 10 years ago. I became very selective at best. Not because I did not want to be educated or informed, rather because I just couldn’t trust what was being reported. Republican or Democratic. It was a joke then and it still is.”

I read this with growing depression. I have been trying to avoid comments on President Trump and the first four weeks of his presidency. We really have never needed an independent, critical (in the best sense of the word) media any more than we do now.

So I thought about it a bit and replied: the original writer is a friend. And more than anything when you attack Trump you get the full wrath of his supporters. Which may well be why the media do appear to be taking his abuse (and that is what it is) far too meekly.

“For 16 years I worked for a news company that was governed by a single, simple, trust agreement that bound its journalists to the principles of integrity, independence and freedom from bias.

We did not always get it right but there were checks and balances in place that gave us integrity and reliability.

I know reporters who have been in the front lines with cameras and notebooks. Who have put their lives at risk to try to provide the rest of us sitting comfortably in our living rooms with an account of events that we might otherwise not comprehend.

I know reporters and cameramen who have died because they were trying to report a story; not even in battle zones; just trying to make sense of demonstrations and a subsequent crackdown.

I know reporters whose families have been threatened because the reporter has pushed hard to discover what really happened rather than what they, and we, were told had happened.

They are not a joke – they are part of a serious profession.

The answer like, most things, is to search for quality, reliability and integrity. There are news organisations that check sources; that report facts; that put news before entertainment. That last note is important – ratings wars and 24hr rolling news have turned some news networks more towards entertainment/reality shows than traditional news sources.

But it is also the role of the media to provide a platform for opinions and debate. Inevitably those debates can reflect the political leanings of that media outlet and maybe of is owner(s)… yes you Mr Murdoch! We do tend to read (or watch) the media that reflects our own values and reinforces our own opinions.

Yet, at its best the media is there to hold us all, including our elected officials, to account. The media is not there to be a cheerleader, being praised for only reporting what our leaders want them to report. Except in the worst totalitarian regimes.

With that in mind the media may be more necessary now than at any time in modern history. There are too many pressure points rights now – from US domestic issues; to the potential collapse of the EU; to the dominance of China in the South China Sea; to the Sunni v Shia battle for Islamic supremacy; to the implications of a bizarre assassination in Kuala Lumpur. We need to understand why these events matter to us and the alternative responses that are available.

I fear, more than I have in a long time, that we are on the verge of something terrifying. I want to know what that is, when it is and why it happens!

I certainly am not ready to trust politicians and business tycoons more than our media. But I do select my media sources! Perhaps that is the real point of this rambling note.

As for your President…..that can be saved for another day and a bottle of wine!”