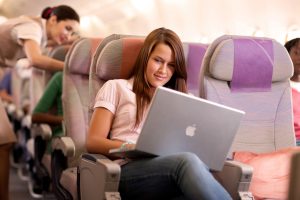 Bad news yesterday for the portable office warrior. People like me who carry a laptop, ipad and one or two cameras onto each flight.

New U.S. and British rules will bar laptops and other electronic gadgets in carry-on luggage. Both governments have prohibited large electronic devices, anything bigger than a mobile phone, in the cabins of certain flights (basically from the Middle East and parts of Africa) headed to their countries. In announcing the rules, officials cited security reasons but didn’t supply many specifics.

The stated purpose of the U.S. ban, which affects nonstop flights from 10 Middle Eastern airports, is to protect travelers from security threats on commercial flights.

The U.S. Department of Homeland Security did not cite a specific threat when it said the ban is aimed at terror groups looking to bypass airport security, other than that it has “reason to be concerned.”

Representative Adam Schiff of California, the top Democrat on the U.S. House Intelligence Committee, said he’d been briefed on the situation and that the steps are “both necessary and proportional.”

The U.K. ban is similar but applies to fewer countries.

The Persian Gulf hubs affected say they have high safety standards to protect fliers. Some aviation consultants, including Addison Schonland with AirInsight Inc., say they know of no credible threats involving technology.

They say the ban won’t necessarily make flying any safer. Determined terrorists, for example, could fly out of unaffected airports beyond the 10 the U.S. is naming. Or they could place a bomb in devices in checked-in luggage.

That has prompted some analysts to suggest that protectionism could be at play here.

One motivation for the ban, some aviation experts say, might be to prompt business travelers to take alternative routes via European hubs to curb the growth of the big three Gulf carriers: Emirates, Etihad Airways PJSC and Qatar Airways Ltd. U.S. airlines have long complained that those three are unfairly subsidized by their governments and have lobbied to restrict their expansion.

President Donald Trump has said he plans to help U.S. airlines compete with foreign carriers that are aided by their governments. The move also comes just weeks after Trump tried to bar citizens of seven predominantly Muslim countries from entering the U.S.

For now, the ban is indefinite. The U.S. has not ruled out that more airports could be added to the list, saying that as threats change, so too will the Transportation Security Administration’s requirements.

It is unclear why the new rules apply to laptops and not mobile phones?

The U.S. said it tried to balance risk with the effect on travelers and therefore has determined that smartphones will be allowed at this time. Prohibited items include tablets, e-readers, cameras, portable DVD players, electronic game units bigger than smartphones and travel printers or scanners.

The U.S. said it notified airlines of the ban on March 21 at 3 a.m. Eastern Daylight Time and gave them 96 hours to comply. That means it will take effect at 3 a.m. Saturday, March 25, but some airlines are enforcing it earlier.

This is one example of many comments on the issue which raise the issue of protectionism.

“This smells like economic protectionism to me disguised as a concern for security. I am not a security expert but a frequent international traveler to one of those destinations in particular, Istanbul. I do not see how a checked laptop makes it safer than carrying it with you into the cabin. Carry-ons pass through two x-rays at Istanbul airport and then you are subject to special screening for US bound flights, which almost always include the special security personnel asking you to turn on your device. If they were really concerned about screening procedures they could easily improve that to eliminate the ‘special’ threat, whatever the intelligence has provided. I think it smells like protectionism because, especially Istanbul and Dubai are emerging as important hubs with expanding transit passenger traffic, especially for business travelers. So, targeting Emirates and Turkish Airlines is a great way to start to deliver on the promise made by Trump to American airline companies. If it is, it shows another low for this administration, to use ‘fake’ terror threats to provide political/economic rents to certain constituents. Of course, there is always another possibility, a backdoor to Muslim Ban. These airlines are deriving the traffic from the majority Muslim countries into the U.S., so creating any inconvenience will go a long way too.”

I am not usually a fan of conspiracy theories. But the new rules do not applied to for instance Delta flights from Lagos and Dakar. So any smart badguy will simply find an alternate route to the USA.

The most immediate impact of this directive will be to inconvenience travelers and potentially to make them change their travel plans and airline. Passengers wanting to travel with tablets and laptops will have to risk theft and damage in order to do so. This will be a complete non-starter for many (or most) business travelers and, for instance, journalists. These people often carry sensitive data on their laptops which they want to retain in their possession.

It is hard to imagine this won’t financially hurt the nine carriers who have hubs in the named cities. Was that the purpose of the US ban. The USA’s major airlines are unaffected.

#Emirates pursers and CSVs carry tablet computers on board. Assume this has to stop immediately. Consistent with new rules for pax.

Trump’s laptop ban is basically going to make it impossible for U.S. journalists to cover events from the Middle East.

Anyone who is a journalist, photographer, researcher, etc is screwed. We cannot chk these devices for fear of it all being stolen.

What procedures will ensure that pax’ electronics in the airplane hold have all been switched off? Presumably important? #electronicsban

Finally on the #electronicsban – are we any safer when the airplane hold is filled with passengers’ personal electronic devices? Unlikely.

This is the reality of the travel ban – we really do not want to put our laptops and cameras into the hold with the risk of damage/loss. This will affect business #travel in a big way. I always carry on my laptop for fear of losing it.

What happens to the EFB (ipad or other tablet flight kits) carried by many pilots from the Middle East hubs? #electronicsban