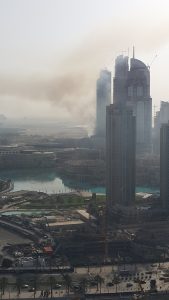 Downtown Dubai woke on Sunday morning to a serious fire in a high-rise tower complex being built alongside the Dubai Mall. The blaze happened just a block away from the 63-story The Address Downtown Dubai tower, which burned in an inferno seen around the world on New Year’s Eve on 2015.

The Dubai authorities said the fire caused no injuries.

Sunday’s fire at the under construction Fountain Views Towers complex began around 5:30 a.m., just before sunrise. Maj. Gen. Rashid Thani al-Matrooshi, the director-general of Dubai Civil Defense, described the fire as an “accident” that started in a parking level of the Fountain Views building.

Dubai Civil Defense also posted a picture online of three workers it said it rescued from inside the structure. It said the men were taken to a hospital to be examined.

Mid Sunday morning, flames still licked out of the podium level of the building as firefighters on ladders shot water inside. Every few minutes, small blasts could be heard, presumably from exploding propane or welding tanks left behind by construction workers.

The 60-story Fountain Views complex, which is being built by state-backed Dubai developer Emaar Properties, eventually will connect to the massive Dubai Mall across the street. It’s planned to eventually be home to 788 apartments and a hotel.

Presumably many of the new apartments have been sold off plan. Purchasers will be concerned at new delays and safety concerns.

Emaar, which built both the Dubai Mall and the tower struck by the 2015 blaze, issued a statement saying it was “awaiting the final report” of investigators.

Dramatic fires have hit skyscrapers in Dubai and other fast-growing cities in the United Arab Emirates in recent years. Building and safety experts have cited a popular type of cladding covering the buildings that can be highly flammable. Bloomberg noted that authorities say they’ve changed fire safety rules in the city to address the danger, but have offered few details.