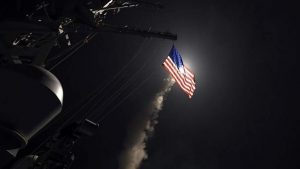 The world is a scarier place today: after an apparent nerve-gas attack by the Syrian air force killed more than 85 people in the rebel-held town of Khan Sheikhoun on April 4th Mr Trump has now taken action.

American ships fired 59 cruise missiles at the al-Shayrat airfield, from which planes carrying the chemical bombs are believed to have taken off.

The strike was limited and targeted.

The Russians were informed of the strike in advance, but they were not, apparently, consulted over it. The warning, doubtless passed on to the Syrians, seems to have given the latter enough time to evacuate at least some of their planes. In military terms, therefore, the operation will make little difference to the Assad regime’s capabilities.

Mr Trump will be praised by many for his willingness to make more than a hand-wringing statement about the Syrian regime.

The question now is what happens next. Rex Tillerson, Mr Trump’s hitherto almost invisible secretary of state, is due to meet Russia’s president, Vladimir Putin, in Moscow next week.

The change in US strategy is near remarkable: only a few days ago, Mr Trump’s officials were signalling that it was no longer an aim of the administration to remove Mr Assad from power as a prerequisite for a deal to end the war in Syria.

The initial reaction from the Kremlin was to brand the American action as a violation of international law, but Mr Putin the pragmatist may decide that nothing further needs to be done.

At home, Mr Trump will almost certainly see at least short-term benefits. The speedy way the action was carried out creates a counter-narrative to the picture of muddle and confusion his administration usually presents, particularly in the recent debacle over health care.

Rarely has a policy changed so far and so quickly – and rarely has it been acted upon so swiftly.

This is the same Trump that previously tweeted:

Donald J. Trump @realDonaldTrump
The President must get Congressional approval before attacking Syria-big mistake if he does not!

The military action makes even more glaring the USA’s lack of humanitarian action. Mr. Trump is still banning the children and other refugees that he says that he was defending.

Trump critics are saying that the target was well chosen and that his speech to the nation struck the right tone. But extremely serious risks lie ahead.

Trump’s flip-flop on Assad in Syria in the span of just a week shows how little thought and strategizing he has put into his foreign policy.

Meanwhile America has aligned itself against Iran, Russia and Assad’s Syrian forces. There are also Chines force operating alongside Assad’s militia.

Military officials say that that their actions are intended “to send a message.” What message? Will Bashar al-Assad now cease his murderous actions because he’s just been delivered “a message”?

How are we supposed to believe there is any strategy to Trump’s actions anyway? Just last week, Nikki Haley, Trump’s UN ambassador, said of Assad: “Do we think he’s a hindrance? Yes. Are we going to sit there and focus on getting him out? No.”

What the erratic flip-floppery of Trump’s foreign policy really means is that America’s foes can easily manipulate the Trump administration. A precedent has been set.

Syria’s awful civil war has no military solution. At best it needs careful agreement between many different parties.

Thursday’s reckless and largely ineffective bombing does little but make US lawmakers feel good about themselves.

At its worst, it deepens a war which the US has no idea how to end.