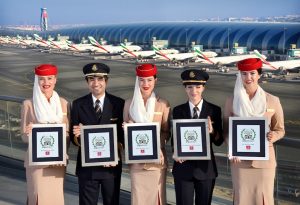 So TripAdvisor has gone into the awards business and has made Emirates very happy with five wins including Best Airline in the World, Best Major Airline – Middle East & Africa, Best Economy Class, Best First Class and World’s Best Airlines – Top 10

The was the inaugural TripAdvisor Travelers’ Choice® Awards for Airlines and award winners were determined using an algorithm that took into account the quantity and quality of airline reviews and ratings submitted by travellers worldwide over a 12 month period.

The results are in some cases surprising; even strange.

Emirates has the world’s biggest international network and carries more international travelers than any other airline. Just on that basis it is always likely to be in the frame for leading airline awards. Yet in third and fourth place in the world awards are airlines that basically only fly domestic routes – Azul and JetBlue – who coincidentally have the same founder in David Neeleman.

Thai Smile – a small low cost Thai AIrways subsidiary finishes 8th in the top airlines in the world – that makes no sense. Thai Smile was also the winning favourite regional carrier in Asia Pacific and the best airline in Thailand.

WIth just a handful of flights outside of Thailand even calling Thai Smile a regional carrier is generous.

Cathay Pacific do not even make the list of top ten airlines in the world.

Aeroflot as the best airline in Europe? Congratulations to them – but how on earth does that happen unless there are huge numbers of Russian domestic flyers filling in TripADvisor reports.

So well done to the winners. But the basis of calculating the awards may need some adjustment in the future!

Top airlines in the world