Home→Aviation→United – the not so friendly skies 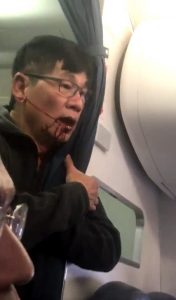 Following the events on United Flight 3411 at Chicago O’Hare the US based journalist Steven Thrasher left a series of notes on twitter and they are thought-provoking and touch on issues that many Americans will avoid or ignore.

Steven W Thrasher is writer-at-large for Guardian US. He was named Journalist of the Year 2012 by the National Lesbian and Gay Journalists Association. His work has appeared in the New York Times, the Village Voice, Rolling Stone, BuzzFeed, the Advocate and more. Follow him on Twitter at @thrasherxy or visit his website.

Read this series of tweets following the astonishing removal of a passenger from a United flight at Chicago O’Hare this weekend.

1. There will be defenses of United saying “Well, if the man had obeyed he wouldn’t have been dragged off the plane.” This is bullshit.

2. I am concerned how much of the American mind has been trained to OBEY above all else – by education, business, government, police…

3. There’s an unhealthy logic in thinking if the Asian man refused to give up his seat that the appropriate response was state violence…

4. This logic is often applied to Black men and police – “If he’d obeyed he’d be alive!” It’s a message meant for the deceased & living…

5. There are endless things to do to NOT use state violence but the American mind has been trained to think COMPLY OR BE DESTROYED…

6. Onus is on United for overselling flight NOT on person who bought ticket. United used state violence to deflect their fault.

7. United could have mediated, put their staff on another flight or SIMPLY WAITED. So much American violence could be mitigated by WAITING.

8. Since I returned from my last trip abroad I’ve been overwhelmed by messages of fear & obedience from US culture, biz & govt.

10. We also need to acknowledge this as an act of racial violence against an Asian man. Would a white woman have been dragged like this?

11. Did refusal from an Asian man prompt the response? What messages & pain does the image of him being dragged do to our Asian siblings…

13. I can’t in a MILLION YEARS believe a blond woman would be yanked off like that by a cop. Whole plane woulda been deplaned first!

12. …what messages is it reinforcing about how Asians/Asian Americans better obey OR ELSE

14. There’s some deeply contextual US history leading up to a cop taking control of an Asian man’s body on behalf of a corporation.

15. Asian bodies have been violently moved by the US state via Chinese Exclusion Act of 1882 & Executive Order 9066 (Japanese Internment)…

17. But thanks to United Airlines, an Asian body is made visible in a way Hollywood couldn’t ever manage…as a SUBJECT OF STATE VIOLENCE!

18. United employees now say they followed “right procedures” to call police. In the US, “right” means STATE VIOLENCE not moral or logical

19. Will watch United CEO who is Hispanic. Often POC are made heads of corps to manage biz & state violence, *not* to protect other POC

20. Think of what (or, rather, WHO) could have been saved by *waiting out* and *talking* rather than resorting to US state violence…

21. Harm to this Asian man + deaths of Tamir Rice John Crawford Sandra Bland John Crawford & more could have been avoided by JUST WAITING

22. A lack of moral imagination, critical thinking & patience is escalating situations to state violence in an increasing number of arenas

23. This United episode is reflective of a state of moral, intellectual & spiritual crisis US thirst for violent “solutions” creates

24. A reader prompts me to think of disability. What if passenger was (noticeably or not) disabled – people SO harmed by state violence?

25. Also – what does this do to people w disability who travel? Give them more anxiety? Who are disproportionately hurt by police anyway?

26. Airlines are natural nexus of “private” biz & the state. We call them “civilian” but they’re highly militarized (TSA, DOD contacts)…

27. …as such they’re a natural fit for merging of “private” biz being resolved by state violence. But we see this many places now, SO…

28. …do NOT be surprised when other “private” biz sectors (esp. healthcare & tech) resolve conflict w the state violence that supports it

29. *Especially* regarding conflict with noncompliant people of color, the disabled and/or the poor.

31. A recurring concern of people of color in the US: who can touch & control your body? It’s dramatized by GET OUT, United & cops alike.

32. This bodily fear is realized in many ways, from touching hair to denying abortion to arrests. United made a new arena for this fear.

33. I think an aspect of US ableism (& why police are deadly w disabled POC) is because it impedes a person’s ability to obediently COMPLY

34. & not swiftly complying w authority & the orderly execution of profit is considered the ultimate US transgression, worthy of violence

35. I am saddened, but not surprised, at how many people wanna justify this biz/state violence as *necessary* because of “protocol”

36. Assuming biz/state violence of this kind is unavoidable reflects how US capacity for critical thought is mired in the THE SUNKEN PLACE

37. And BTW, this is a dramatically captured, but representational, example of how “private” biz uses state violence. It’s not so unusual.

Finally – I am heartened by our collective ability to see links in racism + capitalism + ableism + education + the violence of the security state.

There is so much more that could be said about this incident. United’s initial response was appalling; only 48 hours later has their under-fire, foot-in-mouth CEO, made a full apology to the customer.

And as a final passing thought – once upon a time I would like to think people would have jumped up to defend the poor man on #flight3411 – now we reach for our cell phones.

A letter to the Chicago Tribune from a passenger on the flight: I was on United flight 3411. Here’s what I saw.