Home→asia→Erdogan turns up the heat in Turkey 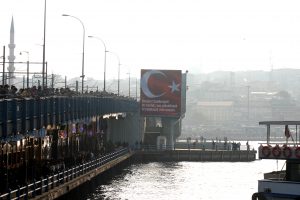 Some interesting notes in the Economist as Turkey goes to a referendum today.

Turkey matters not just for its size, but also as an indicator of the political forces shaping the world. For centuries it was the seat of a great empire. Today, as a frontier state, it must cope with the violence spewing out of war-ravaged Syria; it is a test case of whether democracy can be reconciled with political Islam; and it must navigate between Western liberalism and the authoritarian nationalism epitomised by Russia.

In recent years under Recep Tayyip Erdogan, Turkey has gone backwards. This weekend it can begin to put that right. But that is unlikely.

The referendum will determine whether Turkey abandons its parliamentary system for an executive presidency.

Rather like Thailand’s constitution referendum last year the no campaigners have been out numbered, out monied, and get little media coverage.

A “yes” vote would overhaul the state in its present form, abolishing the post of prime minister, sidelining parliament, and formalising a system in which the president answers no one except voters. A “no” would mark a major setback for Recep Tayyip Erdogan, Turkey’s president, though far from a fatal one.

After Mr Erdogan came to power in 2003, he and his AK party did a lot that was good. Encouraged by the IMF, he tamed inflation and ushered in economic growth. He also spoke up for working-class religious conservatives, who had been locked out of power for decades.

A yes vote today could leave Mr erdogan in power until as late as 2034.

But today Turkey is beset by problems. In the shadow of the Syrian civil war, jihadists and Kurdish militants are waging campaigns against the state. Last summer the army attempted a coup. Arrests and detentions followed. Still do.

The economy, once a strength, is growing slowly, plagued by cronyism, poor management and a collapse in tourism.

Mr Erdogan argues that, to put this right, Turkey needs a new constitution that will generate political stability. He says that only a strong president can galvanise the state and see off its enemies. Naturally, he is talking about himself.

The new constitution embodies the “illiberal democracy” of nationalists such as Viktor Orban of Hungary and Vladimir Putin of Russia, to whom Mr Erdogan is increasingly compared.

Yet this kind of stability is hollow. The most successful democracies make a point of separating powers and slowing governments down.

Since the failed coup, Erdogan has been governing under a state of emergency. Roughly 50,000 people have been arrested; 100,000 more have been sacked. Only a fraction of them were involved in the coup.

Anyone Mr Erdogan sees as a threat (or who is seen as a threat to Mr Erdogan) is vulnerable: ordinary folk who went to a Gulenist school or saved with a Gulenist bank; academics, journalists and politicians who betray any sympathy for the Kurdish cause; anybody, including children, who mocks the president on social media.

Whatever the result today, Mr Erdogan will remain in charge, free to use—and abuse—his emergency powers.

Erdogan is basically an old-fashioned authoritarian who will one day leave the stage, taking his authoritarian instincts with him.

Which is why it is important to stay engaged with Turkey as both a NATO member and a regional power.

Engagement is also in Turkey’s interests. The EU is its biggest trading partner. Contact with it bolsters the Western-leaning Turks who are likely to be Mr Erdogan’s most potent opposition. NATO membership can moderate the next generation of officers in its armed forces. EU membership, first proposed some thirty year ago, is now in never-never land.

Today if Mr Erdogan loses, Turkey will be a difficult ally with a difficult future. But if he wins, he will be able to govern as an elected dictator.

Rock and a hard place!