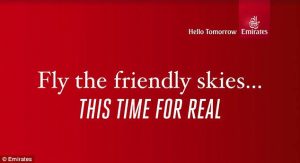 Emirates is getting a lot of its fans to like its latest advertisement and video suggesting that Emirates represents the friendly skies.

The advertisement was placed following the assault on Dr. Dao on United flight #3411.

Fly the friendly skies was of course a long used tag-line for United Airlines.

But two things jar about this advertisement.

Firstly a simplistic view that you should never hit a person or an airline while they are down. And United is down.

Hitting a man while he is down is cowardly – it usually comes back to bite you. Karma.

But that is what Emirates did: they were not alone.

Emirates lampooned United’s motto on its Twitter account, urging passengers to “fly the friendly skies with a real airline,” while Qatar Airways tweeted an image of its own app, which it said “doesn’t support drag and drop.” Royal Jordanian Airlines joked that it’s also against dragging in an anti-smoking advertisement, while Turkish Airlines pointed out that it last week added an extra passenger to one of its flights after a baby was born on board.

Of course this is all revenge for years of gibes from Delta, United and American over the part played by state funding in their success stories of the Gulf based airlines.

The Emirates tweet includes a video mocking United Chief Executive Officer Oscar Munoz’s suggestion this year that Gulf carriers “aren’t real airlines” by highlighting its Tripadvisor ranking as the world’s best carrier in 2017. The post ends with the punchline: “Fly the friendly skies… this time for real.”

But what we should be doing is cheering the tarnsparency that holds United to account. That passengers who took video of the incident were not intimidated to stop them from using social media to show Dr. Dao’s mistreatment.

A similar incident in Dubai or onboard Emirates would almost certainly have seen passengers told not to take video and threatened with prosecution for showing video or pictures.

After the crash of EK521 the GCAA were quick to issue the following tweets:

Sharing such practices is considered to be irresponsible and disrespectful to the victims, and is punishable under #UAE law.
— GCAA UAE (@gcaa_uae) August 4, 2016

For Dubai and Emirates the issues were about avoiding damage to the brand. How United must have wished for similar legislation.

So for Emirates to use the stricter UAE legislation to then take advantage of a competitor’s misfortune may be opportunistic but it is also tasteless and misleading.