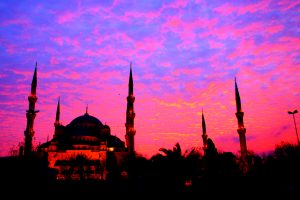 President Recep Tayyip Erdogan is claiming a victory for his yes campaign in yesterday’s referendum on the Turkish constitution.

The result formalizes within the constitution what he’s already started doing in practice: transforming what had been a mostly ceremonial post of President into a position of concentrated power.

The country’s three largest cities – Istanbul, Ankara and Izmir – voted against the changes, and so did the vast majority of Kurdish voters and many of the coastal cities, indicating a general decline in the ruling party’s support.

Erdoğan has said he would immediately discuss reinstating the death penalty in talks with the prime minister and the nationalist opposition leader, Devlet Bahçeli. The president said he would take the issue to referendum if necessary.

Opponents say it’s becoming the seat of one-man rule. But the thin margin of victory and the election board’s decision to accept ballots that didn’t bear an official stamp have cast doubt on the integrity of the vote.

Marginalising the media made the Yes campaign dominant. Media that reflected contrary views, or opposition platforms, have been intimidated and closed.

As of January 2017, more than 80 journalists and 150 media workers were in prison in Turkey, more than in any other country. Leading journalists were under intense pressure before the ballot to declare their hands and some fear that they too will be targeted for not enthusiastically supporting a yes vote.

Here is Bloomberg’s a look at what the outcome of the vote means for Turkey and its most powerful leader since founder Mustafa Kemal Ataturk:

1. What new powers does Turkey’s president get?

The winner of the next scheduled presidential election in November 2019 – or any snap vote called before that — will be anointed head of the executive branch, with the authority to issue decrees carrying the force of law. He or she will be empowered to prepare the budget, dissolve parliament and appoint high-level officials, including ministers and some top judges. The president would also be able to declare a state of emergency restricting basic rights and freedoms, a power currently held by the government.

2. How long could a president serve?

Two consecutive five-year terms. A president could automatically stand for a third term if parliament calls snap elections during his second tenure. Hypothetically, Erdogan could stay in office beyond 2029. “Turkey is moving to introduce the most important government reform in its history,” Erdogan said in a televised speech marking the win.

3. Is the political turmoil surrounding the vote over?

Not at all. With 98 percent of ballots counted, the referendum was approved by a vote of 51.3 percent to 48.7 percent, according to state-run Anadolu news agency. The outcome has been contested by three different groups after the High Board of Elections agreed to accept ballots and envelopes that did not bear an official stamp, unless they’re proven to have been brought in from outside a polling site. The board said it made that decision after receiving a large number of complaints about envelopes without official stamps.

4. What is parliament’s role in the new system?

Parliament would have limited oversight over the executive branch. It would have 600 members, up from 550. A supermajority of at least 360 votes would be required to open an investigation of the president, his deputies or ministers. In the event of a probe, the president wouldn’t be allowed to call early elections. With 400 votes, the legislature could refer a case against the president to the country’s top court. The parliament could shorten, extend or lift a state of emergency.

5. What does Erdogan’s victory mean for the economy?

Economic activity is reeling from the political turmoil and militant violence that have beset Turkey in recent years, including an attempted military coup in July last year and an ensuing government crackdown on the civil service and media. The nation lost its investment-grade credit rating last year. Some analysts predicted victory will usher in a period of greater stability, and may lure back some of the foreign investment that’s fled. But Erdogan’s habitual interference with monetary policy through his calls for lower borrowing costs may continue to deter money managers. “One-man rule will exacerbate economic problems and might further increase the risks stemming from a volatile political and societal backdrop,” said Wolfango Piccoli, the London-based co-president of Teneo Intelligence, a political-risk advisory firm.

U.S. ties have been strained by Washington’s support for Syrian Kurdish rebels Turkey labels terrorists. Relations with the EU soured over the crackdown and attempts by Turkish officials to campaign for the referendum among expatriates in Germany and the Netherlands. Several Turkish cabinet ministers said Turkey will press the EU harder for visa waivers in exchange for continuing to halt the flow to Europe of migrants from countries in conflict in the Middle East and Africa. The U.S. needs Turkish support to quell Islamic State, so Ankara hopes to use this leverage to persuade the Trump administration to rethink support for Syrian Kurdish fighters. “Turkey desperately needs a new and calm and constructive foreign policy drive, not least for major economic vulnerabilities ahead,” said Ziya Meral, a fellow at the Centre for Historical Analysis and Conflict Research, based at the Royal Military Academy Sandhurst in the U.K.

7. Is there a risk of violence?

The questions surrounding the narrow victory have produced a charged atmosphere in Erdogan’s Turkey, which has a history of deadly confrontations between anti-government protesters and security forces. Demonstrations in 2013 over plans to develop an Istanbul park degenerated into weeks of clashes that claimed more than a dozen lives.

In the meantime, Erdoğan can look for comfort on a world stage, where autocrats in Russia, the Philippines, in Egypt and the Arab world, (Bloomberg forgot to mention Thailand!) and a would-be strongman in Washington, are confidently showing their hands. “He thinks he can be like them, said one leader in the Arab world. “He sees Vladimir Putin and he likes what he sees. Turkey is more robust than Russia though. All he has delivered so far is uncertainty.

As I have family in Turkey I do take an interest in what is happening there. But I will be taking that interest from a distance.