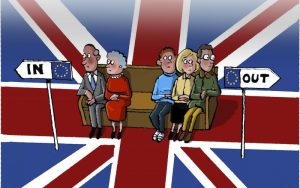 Here we go again. It is less than two years since Britain’s last general election, ten months since the Brexit referendum and nine months since Theresa May entered 10 Downing Street, replacing David Cameron.

Yet today the prime minister announced that the country would soon face more upheaval: a snap general election on June 8th. Polls suggest that her Conservative Party will win comfortably.

But Britain’s negotiations with the European Union will make the election a more complicated contest than Britain has seen in many years.

Under the Fixed-term Parliaments Act of 2011, Mrs May needs the backing of two-thirds of the House of Commons to call an election. (Oddly, her own MPs will have to vote in favour of a motion of no confidence in the government in order to bring the election about.) But this will be a formality: the leaders of the main opposition parties have already said they are in favour.

This was a missed trick for an ill-prepared Labour Party who would have done better to not support an election denying Mrs May the 2/3 vote in Parliament.

The Labour trails the Tories in the polls by more than 20 percentage points, thanks in no small part to the unpopularity of its leader, Jeremy Corbyn.

The betting people believe theat Mrs May will be able to extend her working majority, currently just 17, which will give her a freer hand both in her EU negotiations and in setting an agenda at home, where she has so far proposed very little.

No doubt she is setting out her case as party leader; she has never won a general election, having succeeded Mr Cameron as prime minister only via a Tory party leadership contest.

In her statement announcing her intention to seek an election she went further, implying that it was a chance to heal divisions over Brexit. “The country is coming together, but Westminster is not,” she said. In fact, something like the reverse is true: whereas polls and street marches show that a large minority remain bitterly against Brexit, in February MPs dutifully backed the legislation allowing her to trigger it by 492 votes to 122. Nonetheless, winning a general election would allow Mrs May to claim popular backing for her “hard” approach to Brexit—including taking Britain out of the EU’s single market—something that the referendum did not specify.

Going to the country carries risks for the prime minister. One penalty for doing so is giving up nearly two months of the government’s time and energy, when it has just two years to negotiate its exit terms with the EU. Mrs May might calculate that not much is going to happen until after the German elections in September, so there is little to lose. There is aso the not small matter of the French election in May.

Another complicating factor is the unstable situation in Scotland and Northern Ireland. Only recently Mrs May turned down a request by Nicola Sturgeon, Scotland’s first minister, for an independence referendum in Scotland, on the basis that it would be irresponsible to hold such a vote when the terms of Brexit were not yet clear. It is hard to see why the same cannot be said of holding a general election now in Britain. In Northern Ireland, meanwhile, the power-sharing government is currently suspended, and there is the prospect of a fresh election to its devolved assembly.

Perhaps the biggest complication at home, however, is that division over Brexit has unpredictable consequences for how people will cast their vote. The populist UK Independence Party was jubilant after achieving its defining ambition of Brexit last summer, and was billed by some as a future rival to Labour in many parts of England; but it has since flopped in by-elections. The leftish Liberal Democrats, meanwhile, have defined themselves as the opponents of Brexit, a strategy which has seen them picking up seats in council and parliamentary contests since the referendum. Some senior Tories worry that the Lib Dems will deprive them of victory in many parts of London and the south-west.

These factors meant that the decision to go to the country was harder than it might have looked for a prime minister with a near-record lead in the polls. Last year Mrs May ruled out an election before 2020. In performing a U-turn she seems to have decided that the gamble is worth it.

She is probably right – but it would be oh-so-much-fun if she was not!